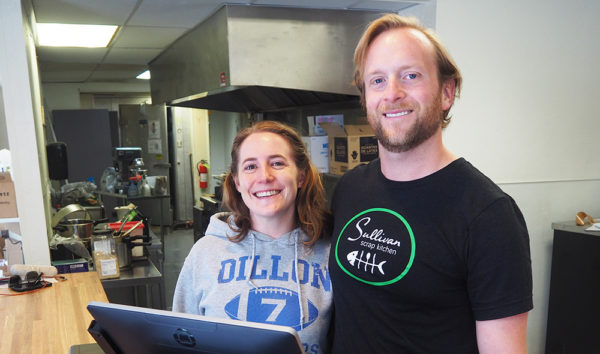 Terence Rogers is looking to complement his catering business.

The co-owner of TBD Foods has purchased the restaurant building at 1740 E. 17th Ave. in City Park West, and is preparing to open Sullivan Scrap Kitchen, a cafe intended to use parts of vegetables and animals that don’t typically make it into his catered meals.

While catering allows some room for experimentation, 30-year-old Rogers — who started what became TBD in 2014 in Massachusetts, and moved to Colorado in 2016 — said he regularly relies on the same premium cuts.

Having a restaurant as well will allow him to utilize entire animals, saving parts such as the sirloin for steaks dished out by TBD, with the less flashy cuts turned into meals at Sullivan Scrap Kitchen.

“With the catering, our thought was always to have a brick-and-mortar concept,” he said. “We just weren’t sure what that would look like.”

Rogers gave the idea a test run in spring 2019, when he ran a temporary concept called Lil’ Scrap Kitchen from TBD Foods’ former commissary space. He said the arrangement was inspired by Copenhagen’s Michelin-starred Restaurant Relae, which has a sister restaurant Manfreds across the street in part due to a desire to minimize food waste.

Sullivan is Rogers’ middle name and his mother’s maiden name. He said he wanted to honor the memory of his late aunt, who often fed him growing up and who always showed interest in his culinary career.

“And at the end of the day, Sullivan Scrap Kitchen rolls off the tongue a little bit better than Rogers Scrap Kitchen,” Rogers said.

While the space is still being repurposed, Rogers said he hopes to open June 23, provided an inspection doesn’t push that back. He plans to be open from 10 a.m. through late afternoon, adding weekend brunch after the July 4 holiday. Dinner service is expected to be added later.

The menu is set to launch with, among other things, grilled lamb neck tacos, an arugula salad featuring chickpeas and feta, and a salmon grain bowl.

“There’ll always be a burger on the menu, there will always be some type of sandwich on focaccia bread, which we bake ourselves,” Rogers said.