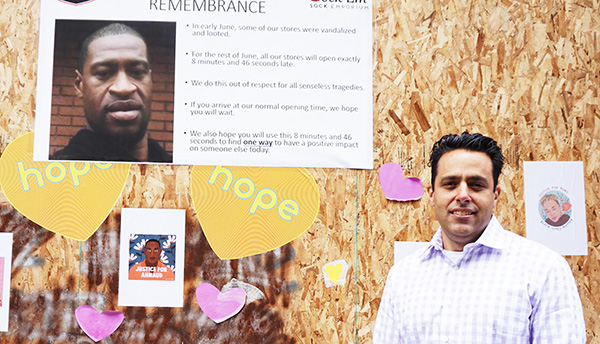 Owner Derek Friedman outside one of his 16th St. Mall Sportsfan locations. Photo by Lily O’Neill.

Early on the morning of June 3, as crowds downtown protested police actions, one of Derek Friedman’s two Sportsfan stores on the 16th Street Mall was looted.

Two days later, Friedman made a change at all four of the sports apparel stores he owns locally. They would now open eight minutes and 46 seconds late, a direct reference to how long a Minneapolis police officer knelt on the neck of George Floyd as he lay on the pavement. Floyd later died.

“The idea of opening late is a way to recognize the pain of the protesters, the pain of the people whose families were directly impacted by Mr. Floyd and everyone else who has come before, but it also recognizes the important part police officers play in keeping the peace when doing it the right way,” Friedman said.

Signs announcing the late opening, and bearing a large photo of Floyd, are posted at each of Friedman’s Sportsfan stores. The new hours extend through June.

“We do this out of respect for all senseless tragedies,” the signs read. “If you arrive at our normal opening time, we hope you will wait. We also hope you will use this 8 minutes and 46 seconds to find one way to have a positive impact on someone else today.”

“We are a minority-owned company, and I’m Hispanic, so growing up I’ve faced situations tinged with racism, and the events with Mr. Floyd and his family are extremely saddening and simultaneously maddening because I lived through this 30 years ago,” he said.

As coronavirus restrictions eased, Friedman reopened all but two of his stores on May 9, but he said traffic and sales have been way down without any games on TV. He also believes the protests have scared away customers.

“We’re not in a position to make the kind of monetary donations to the Black Lives Matter movement as other big companies, so this is a step to invite a conversation and invite people to take some time to make a positive change,” Friedman said.

While the vast majority of protests in Denver have been peaceful, there were 238 instances of property damage as of last week, according to the Downtown Denver Partnership. Most came in the form of graffiti or broken windows, and 130 occurred on the 16th Street Mall, according to the organization.

Friedman said the day before merchandise was stolen from his store on the mall, his location at 1740 Federal Blvd. near Mile High was broken into, but police stopped suspects before they took anything. The Denver Police Department did not respond to a request for comment.

“It’s important to recognize that there’s no need for an aimless sense of violence on either side,” Friedman said. “It’s a time for my employees to take a moment at the beginning of every day and think about the impact of everything that’s happening around them and also ask our customers to do the same.”

Owner Derek Friedman outside one of his 16th St. Mall Sportsfan locations. Photo by Lily O’Neill.

“This is a step to invite a conversation and invite people to take some time to make a positive change,” said Sportsfan owner Derek Friedman.