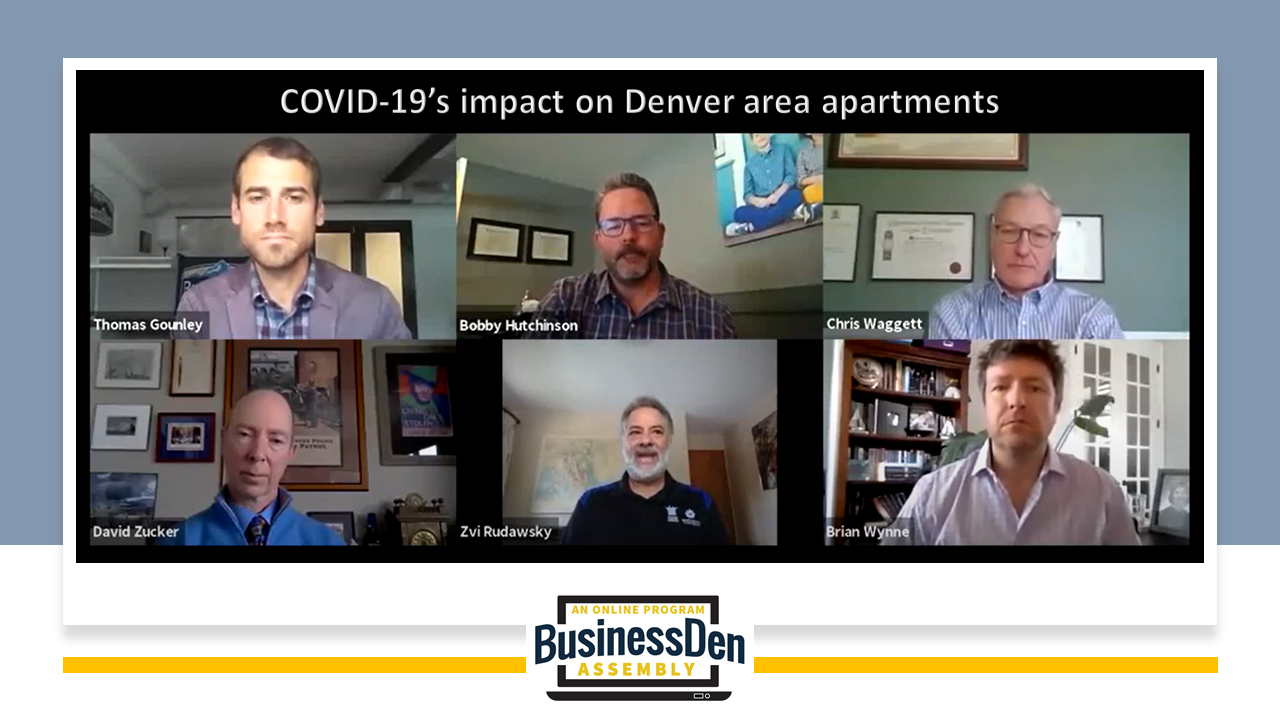 Unemployment benefits and stimulus checks are stabilizing rent payments for now, but local apartment managers and developers fear for an uncertain future if those funds come to an end.

“The benefit from the CARES act on top of the $400 average per week of unemployment in Colorado really has led to 80 percent of unemployed people making more money,” said Bobby Hutchinson, chief investment officer at RedPeak, which owns about 3,200 Denver-area apartments. “You do get some people who come at you with a rent strike, but if those people are utilizing the unemployed benefits, they probably have the money to pay rent and instead are prioritizing other payments.”

Hutchinson was one of five panelists in the fourth BusinessDen Assembly, an online panel discussion exploring how local industries are navigating the pandemic.

Other panelists in the Thursday event, which focused on the local multifamily sector, were Zvi Rudawsky, CEO of Portus, which manages apartments under the Boutique Apartments and Wheelhouse Apartments brands; Chris Waggett, founding partner and CEO of D4 Urban; Brian Wynne, president and co-founder of Wynne Yasmer Real Estate; and David Zucker, CEO of Denver-based Zocalo Community Development.

Hutchinson said that, as of Thursday, just 2.5 percent of tenants hadn’t paid their April rent, a figure that typically would be 1 percent. He said 7.4 percent were delinquent on May rent, but that was down from 7.9 percent at the same point in April.

“We’re communicating early and often with people who are impacted and don’t feel prepared to meet rent, and we have done that consistently and feel that’s been helpful,” Hutchinson said.

Rudawsky, whose company manages 4,200 rental units, said he’s seen a large disparity between the three classes he divides his properties into. Tenants in Class A properties, which he categorized as newer properties that have been extensively renovated, were 3.5 percent delinquent. In Class B properties, which have some level of renovations, 6.7 percent of tenants did not meet their rent. And 22.9 percent of renters in Class C properties, which are located in “tougher” areas, did not make their payment in May, he said.

“Stimulus funds will keep people in their apartments and paying rent for a while, but I worry that the PP funds will go away,” Rudawsky said. “What happens if that program isn’t refunded and our economy isn’t back to where it should be — which it won’t be?”

Zucker said 16 percent of residents at The Quayle, a tax credit project his company developed at the corner of Broadway and First that rents micro-apartments at below-market rates, did not pay April rent on time. And 24 percent of tenants did not pay this month.

“It’s really expressing the sadness of the human toll,” he said. “What we’ve emphasized is empathy among our management team is critical. We don’t want to create more anxiety or nervousness in our residents, so we’re in some ways taking the Hippocratic rental oath — do no emotional damage.”

While apartment operators grapple with that, those on the development side of multifamily are thinking about whether they should make changes to projects in the works in a time of social distancing and public health concerns.

Wynne, who co-founded his Denver-based development and investment company last year after years with Mill Creek Residential, said his team is in the early stages of planning projects. He’s trying to think about three years from now, when he expects to deliver his first buildings.

“It’s a tough prediction on how the customer base will perceive family housing coming on the back end of this pandemic, but we are looking into the expansion of amenity areas to embrace a work-from-home culture,” Wynne said. 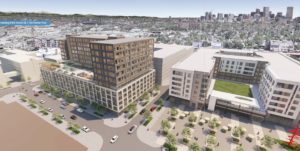 A rendering of the planned apartment complex at Bannock and Alameda. (Newmark Knight Frank)

D4 Urban is the master planner behind a 75-acre area known as Broadway Park at the corner of Broadway and Alameda, entitled for up to 10 million square feet of future development. In March, his firm sold 2.68 acres for $15 million to AMLI Residential. Waggett manages 72 retail tenants within the area, and while he shares concerns for the industry’s future, he’s found a silver lining in the chaos.

“I often tell people you have cycles of the economy and secular disruptions; we’re in a secular disruption,” Waggett said. “The question is how will it play out long term? There are certain changes that are just going to get accelerated because of this. Retail is never going to come back the same way.”

“I have 72 retail tenants, and half of them have needed to renegotiate with me. I’ve made more progress in six weeks than I’ve made in six years. So, it’s amazing how times like this clarify and sharpen the focus and get results we should’ve gotten before.”