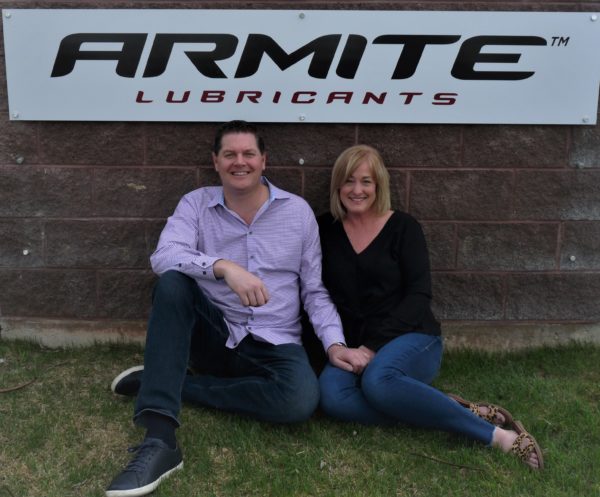 Husband and wife Mike and Kathy Sandstrum always have considered themselves risk takers.

In 2013, Mike started his own business law firm, Denver-based Sandstrum Law, with Kathy as his paralegal. When Kathy’s father passed away unexpectedly two years ago, they were presented with a new challenge.

Kathy, who has been married to Mike for 26 years, watched her father “put his heart and soul” into the business, and wasn’t ready to let it go yet.

“I have four brothers, and I’m the only girl, and it really probably wasn’t going to be an option for them,” Kathy said. “Mike and I already had some insight into the business through some legal aspects we helped my dad with, like contracts. We’re also the only ones that run our own business, so it was kind of natural for us to step in.”

Kathy, who is now CEO, and Mike, who serves as president, acquired Armite in 2019 after purchasing her mother’s shares. Among their first changes was moving the company’s manufacturing facility and offices from California to Lafayette. The founder of Armite, Howard Armington, was originally from Leadville, making the move to Colorado something of a homecoming.

“We had to deal with the sadness that came along with my father-in-law’s passing, as well as the excitement of being able to carry on the legacy he built,” Mike said.

Armite Lubricants offers 16 products, 13 of which are anti-seize compounds, which prevent metals from welding or seizing together at high temperature and high pressure. The company provides military-grade products for the Department of Defense, and an anti-seize compound specially for Boeing. Armite also offers consumer-grade products, such as its 12|34 Miracle Formula, a rust-preventing and moisture-removing lubricant that is popular with boaters.

In order to focus more energy and time on their new business venture, the couple scaled back on their law firm and decided to be more selective about taking on new clients.

“We definitely turned down many cases in 2019 that we usually would have taken on,” Mike said. “Our revenue in the law firm certainly took a huge drop, and we expected it to, but at the same time, we had a plan in place on how to allocate time between both businesses.”

Although the transition from marketing legal services to marketing lubricants and sealants was no easy feat, the couple said their experience in business law, as well as their legal clients, were saving graces.

“I think it’s interesting that there became this crossover between our business clients in that they actually in a lot of ways became our consultants,” Kathy said. “For example, we have a client that deals with environmental compliance, and we actually hired him to do our environmental compliance report with another client who deals in construction and development.”

The first year was smoother than expected, Mike said. Despite expensive relocation costs and a new learning curve, Armite’s revenue in 2019 was within 10 percent of the prior year.

The company has five employees, including the Sandstrums. The company’s director of operations and director of production, a married couple, moved from California to Colorado. The Sandstrums also employ their daughter Megan, who serves as the director of business development.

Since they took over the business, the Sandstrums have updated the company’s logo, website and product labels. They also earned a Women-Owned Small Business certification and are obtaining a Women Business Enterprise certification.

Kathy’s father had a love for the aerospace industry and grew the company’s customer base within that community. The Sandstrums now hope to introduce Armite Lubricants to other fields, such as the automotive and railroad industries. Their long-term goal is to make Armite a household name in both the industrial and consumer markets, they said.

“It’s almost like a startup in a way since it’s doing well and making good money, but we took it and gave it a rebirth and brought it into the 21st century with the focus on hiring more sales and manufacturer reps,” Mike said. “We want to keep it here in Colorado while trying to make it the biggest and best it can be.”

As for the law firm, the Sandstrum couple don’t plan to stop providing legal services anytime soon and already has started taking new clients again as a result of the pandemic.

“We are balancing both like the scales of justice,” Mike said.

“Our revenue in the law firm certainly took a huge drop … but at the same time, we had a plan in place on how to allocate time between both businesses,” said Mike Sandstrum.