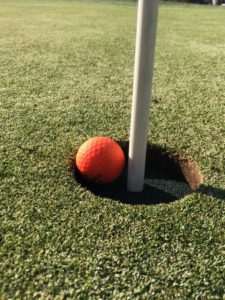 Most of the other courses around Denver that shut have reopened and are reporting packed tee sheets. (BizDen file)

An employee of Pinehurst Country Club in a note to members said that motorists near the course were taking photos of golfers and calling the authorities.

“The Denver Police actually showed up Tuesday to follow up on those complaints and I had to physically show him the email from the City Councilman saying that we had the governor’s approval to play golf under the rules that we established and are enforcing,” read the note sent last week.

Most of the other courses around Denver that shut have reopened and are reporting packed tee sheets. And a handful more of the nicer public courses will open this week, including Bear Dance Golf Club, Fossil Trace and The Ridge at Castle Pines.

Hancock plea to hotels: Denver Mayor Michael Hancock on Monday released an open letter to owners and operators on the city’s hotels.

In the letter, which Hancock shared on Twitter, he said, “We need an additional 3,300 rooms to meet the anticipated need among people experiencing homelessness and the needs of our local hospitals in the weeks ahead.”

“I realize there are many hurdles — insurance, staffing, house rules, food service and more — that must be overcome,” Hancock wrote. “My staff has been instructed to work quickly and creatively to help overcome any and all barriers. I implore you to consider, or reconsider, your involvement in this humanitarian issue while your properties sit underutilized at best or entirely empty at worst.”

Hancock said the city already had leased 120 rooms, and plans to convert the Colorado Convention Center into a 2,000-bed field hospital.

VF Corp.: The Denver-based parent company of brands such as The North Face and Smartwool said its executives will make a reduced salary for the next four months.

VF, which recently moved its headquarters to Denver from North Carolina, said CEO Steve Rendle’s base salary will be cut 50 percent, and that base salaries for other executives will be cut 25 percent.

The company said it will reassess the reductions after four months.

Layoff notices: Among the entities notifying Colorado about workforce reduction in recent days was Pac-12 Networks, the TV company of the Pac-12 Conference.

The conference announced March 14 that it was canceling all sporting events through the end of the academic year.

In an April 3 letter to the state, Pac-12 Networks said it had been slated to work with 531 freelancers between March 14 and May 23, four of whom were slated to work at the University of Colorado Boulder.

Most of the other courses around Denver that shut have reopened and are reporting packed tee sheets. (BizDen file)