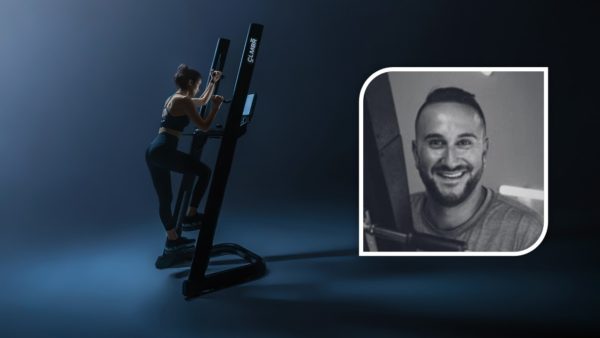 The last time Denver entrepreneur Avrum Elmakis launched a new business during a recession, it worked out better than he could have dreamed.

After building a pet treat company he launched in 2008 into a behemoth with more than $100 million in annual sales, Elmakis, 40, has focused on the fitness industry.

Now he hopes to take a big bite of the market for workout machines with his new stationary climbing device: CLMBR.

The 8-foot-tall invention is similar to a stair climber with hand pegs. It uses both the upper and lower body for a high-intensity cardio workout combined with resistance training.

“The body wasn’t designed to bend over and ride a bicycle,” said Elmakis, who also owns a handful of Denver gyms called Rise Nation that soon will swap in the CLMBR machines. “The body is designed to crawl and climb. Businesses and individuals working out at home who are looking for safety, innovation, efficiency and a small footprint will find it in CLMBR.”

In the last recession, Avrum and his wife Lauren founded Best Bully Sticks, which manufactures and sells pet treats. The couple struggled to find natural treats and chews for their dogs, so they created their own to sell online.

Elmakis remains a large equity holder and the company’s executive chairman, and serves on the board of directors.

“The pet business was focused on milk bones and other machine-made treats, and I felt like there was a significant opportunity to disrupt that by offering proper nutrition,” Elmakis said. “And that’s exactly what I’m doing with CLMBR. What’s new in fitness is the new treadmill, elliptical or bike. This is massively disruptive in a niche market that’s starving for innovation.”

Not all of Elmakis’ ventures have been home runs. In 2014, Elmakis caught the fitness bug and started competing in triathlons. He bought the triathlon company Richmond Multisports, which put on races around Central Virginia.

What started as a passion project turned out to be too much for Elmakis, so he closed the company a year later and donated the races to the community for fundraising.

In 2017 he moved to Denver, after selling the majority of Best Bully Sticks to a private equity firm. He uprooted his wife and four daughters and resettled in Colorado, eager for a new adventure.

Each Rise Nation Colorado location uses 25 to 35 Versa Climber machines. And as Elmakis became more familiar with the equipment, he saw the drawbacks.

He was frustrated with the machine’s outdated design that featured an intrusive central pole, which blocks users’ views and interferes with body posture. Elmakis also wanted to update the user interface to make it more customizable to a variety of workouts.

“Comparing the old machines to the CLMBR is like comparing a microwave from the 1950s to one now,” Elmakis said.

Elmakis hired a team of engineers and designers to help build his first prototype last summer. He has six employees and funded the venture with $3 million to $4 million of his own savings and several million from other investors.

The CLMBR’s new ladder design removes the intrusive pole. The updated user interface is loaded with tutorial videos to help users understand the benefits of climbing and proper form. It also has 11 resistance settings to help customize the workout and an app to record key metrics, such as vertical feet climbed, elevation, power and tempo. Optional integrated audio can fill a studio with music and an instructor’s voice.

“This is a no-impact device in a defined plane of motion, so the user’s form is fairly controlled,” Elmakis said. “If you think about running on a treadmill, which is one of the most common forms of fitness equipment today, it’s really just working the lower half of your body and creates a lot of impact on the knees, hips and joints … CLMBR is a full-body exercise. ”

The machine is available only on the company’s website for now, but Elmakis said it will be available on Amazon and other large retailer sites in the next few weeks. He anticipates that first units will ship in the fall, depending on overseas production. The company also has national distributors in talks with commercial gyms, hotels and apartments.

Eventually, Elmakis hopes to replace all of the climbing machines in Rise Nation Colorado locations with his own. But while gyms remain closed, Elmakis said CLMBR has other opportunities.

“It’s a crazy time to start a business, but the good news is people have this predisposition to working out,” Elmakis said. “I think they’re working out more because it’s a great reliever of stress and anxiety, and I think businesses that survive this pandemic are going to be looking for innovation to attract members, so I’m hoping they turn to us.”

Editor’s Note: The estimated date when the machines will ship has been updated.

“What’s new in fitness is the new treadmill, elliptical or bike,” said Avrum Elmakis. “This is massively destructive in a niche market that’s starving for innovation.”