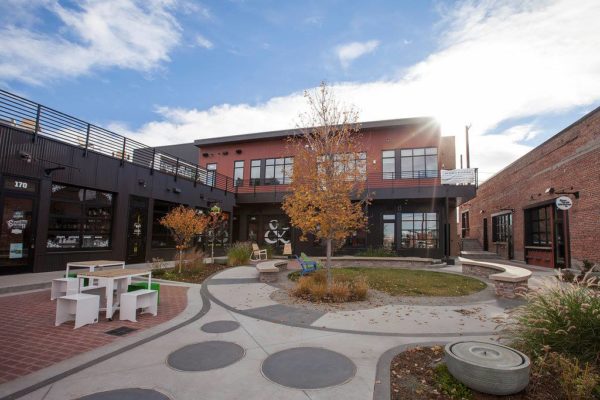 Fiona Arnold is in the restaurant business.

She co-owns Blue Sparrow Coffee, which has two locations, as well as the 4-month-old restaurant Queens Eleven in RiNo and the even-newer cocktail bar Room for Milly on Platte Street.

All have closed, a decision that she said was made before it was clear that carryout and delivery options would be allowed to continue.

“We’d done an employee grocery store and gotten rid of all our inventory,” she said. “It didn’t seem to make sense to ramp up again.”

Arnold is also a landlord. She’s the president of Mainspring, which developed Backyard on Blake at 3040 Blake St. The project has a number of small retail tenants which, like her own businesses, aren’t operating.

“We’re kind of experiencing it from every angle,” she said of the coronavirus fallout.

As the start of the month approaches, when most tenants are getting out their checkbooks, landlords of retail properties find themselves overseeing one of the hardest-hit parts of the U.S. economy.

In Denver and many other cities, their tenants essentially are barred from opening their doors by government order — making the approach they take critical. Demand rent as usual? Tell tenants they can pay up later? What about skipping the month’s rent and hoping things get brighter when May rolls around?

Livaditis has about 15 retail tenants across a half-dozen buildings in Denver. He also regularly represents landlords in lease negotiations through his firm Axio Commercial Real Estate.

From the clients he’s recently spoken with, “We’re finding very varied responses,” Livaditis said. Some lenders insist that a contract is a contract, and payments can’t be missed. But he’s also heard of some lenders with retail shopping center loans allowing landlords to defer three months of payments.

“The moral of the story for me is this is where relationships are tested,” Livaditis said. “Who you do business with later is likely to be dictated now.”

Livaditis said one popular approach he hears landlords taking is deferring April rent, meaning tenants will need to pay it later. He also said he’s counseling landlords to go tenant-by-tenant to figure out a plan, as opposed to giving every tenant the same treatment.

Landlords with smaller or independent retailers are most challenged, as margins are generally thin. Those with national retailers likely breathe easier, although they’re not out of the water. The Cheesecake Factory sent a letter to landlords March 18, saying the company would not be paying rent April 1, according to a copy obtained by BusinessDen. Mattress Firm has done the same, according to reports.

Stanley Marketplace, which he and Denver-based Westfield opened in a former manufacturing facility in Aurora in late 2016, is closed to the public, but most of its restaurant tenants have been producing food for pick up by vehicle.

“What they’re doing is a fraction of their normal business, but they keep some people employed,” Shaker said. 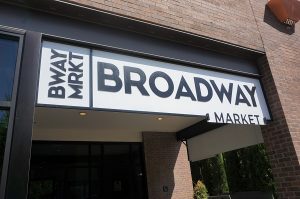 Broadway Market has been closed for two weeks. (BizDen file)

Shaker’s Broadway Market, meanwhile, which opened at the edge of the Golden Triangle in Denver last year, has been closed completely for two weeks. He said part of the reason is that the facility lacks Stanley’s large parking lot, making pick up a challenge.

Shaker owns the Stanley Marketplace real estate, but Broadway Market itself is a tenant. He said he’s told businesses in each project that they aren’t being charged in April.

In addition to his tenants that have slashed staff, Shaker said he’s cut 75 jobs. He employs the bar and front desk staff at Broadway Market, as well as the Stanley Beer Hall and an event space at Stanley Marketplace.

January and February tend to be the slowest months for restaurants, Shaker said. Stanley Beer Hall’s sales generally double between mid-March and mid-October, when the business is able to use its huge patio.

Shaker noted that it’s unclear when his venues will be able to resume normal operations. It won’t necessarily be a date announced by a government official, he said. It will be when people feel comfortable being out around other people.

“We’re looking at ways that we stay relevant,” he said.

Beyond the food hall, Shaker also said he expects many local restaurants that are closed to not reopen.

“I think we’re going to lose a huge chunk of our food and restaurant operators,” he said of the area.

Arnold, the restaurateur and developer, said she’s continuing to pay her restaurant employees that aren’t working. The businesses haven’t been operating long enough to have the cash for that, so she’s covering it personally, she said. The landlords she rents from haven’t offered any break on rent.

On the tenant side, Arnold said one of the initial concerns was that commercial mortgages tend to lay out a required “debt coverage ratio,” which compares the property’s net operating income against the size of the mortgage.

“You can’t unilaterally waive a month’s rent for your tenants, or your mortgage could be in default,” she said.

Nevertheless, by last Tuesday, Arnold had decided to act even without clarity from her lender that it was on board with her plan.

“This morning we notified tenants that we will waive all rent and triple-net expenses for April,” she said.

Arnold structured her deal to reward any tenants that do opt to pay her. She said the amount they pay in April — plus an additional 25 percent — will be spread across the year, reducing what they owe in later months.

“A lot of what landlords are doing is really dictated by their lender,” said John Livaditis, who owns shopping centers and regularly represents other retail landlords.