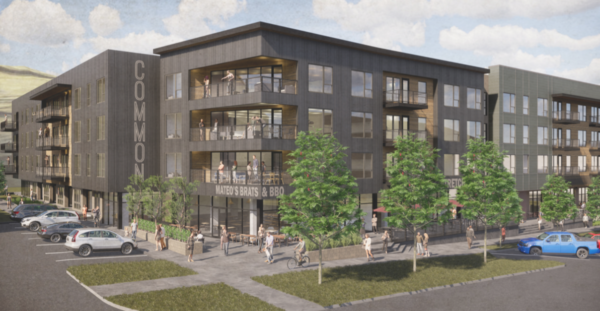 Red Rocks is poised to get some neighbors.

Golden-based Confluence Cos., led by CEO Tim Walsh, gained the city’s approval in early March for a four-story project at 18450 W. Colfax Ave., about two miles north of the park.

The 3.5-acre site, which is in Golden, is the last remaining development pad within Gateway Village, an approximately 22-acre subdivision just north of Interstate 70 master planned by Denver-based Northstar Commercial Partners.

So far, a Harley-Davidson dealership and the Origin Red Rocks Hotel have been built within Gateway Village, and an existing retail space and gas station remain. Northstar is developing a self-storage center as well.

Confluence paid $1.45 million for the site of its project to Northstar on March 19.

The planned 142,541-square-foot building will include coworking, retail and restaurant space on the ground floor. The remainder of the building will feature 164 of what Walsh is calling “co-housing” units, similar to dorms. Each unit will have a private bathroom and kitchenette. Residents making more elaborate meals will be able to use full kitchens on each floor, as well as hang out in the common areas.

“We wanted to take advantage of a lot of the other amenities that are already there,” Walsh said. “There’s a brewery right across the street, a restaurant and a coffee shop. So, it’s rare that you already have some amenities already built in nearby, and what was missing here was really a residential site.”

The smallest units will go for about $1,250 a month, Walsh said. Larger units with multiple bedrooms will be rented by bedroom, for about $900 a month each. Tenants will be able to sign leases for as little as a month or as long as a year.

Walsh said he chose this model, which technically is a commercial boarding house in the eyes of Golden, rather than a traditional apartment complex in order to avoid the city’s 1% growth ordinance, which limits the increase of residential dwellings in the city to a maximum rate of 1% annually. Since the units in Confluence’s project will not have a full kitchen, they will not be considered residential dwellings.

Walsh said the model also allows him to build at a lower price point, and therefore, offer residents a more affordable rental rate. He believes the location, coworking space and lower rent will lure the work-from-home types.

“Golden needs more workforce housing … We will attract the digital nomads who want to live in Golden and not travel to downtown Denver every day, take advantage of the outdoor amenities and be close to I-70 to head up to the mountains easily,” he said.

Confluence plans to break ground on the estimated $34 million project in July, and hopes to complete it by summer 2021. Craine Architecture is the project architect.

“We will attract the digital nomads who want to live in Golden … take advantage of the outdoor amenities, and be close to I-70 to head up to the mountains easily,” CEO Tim Walsh said.