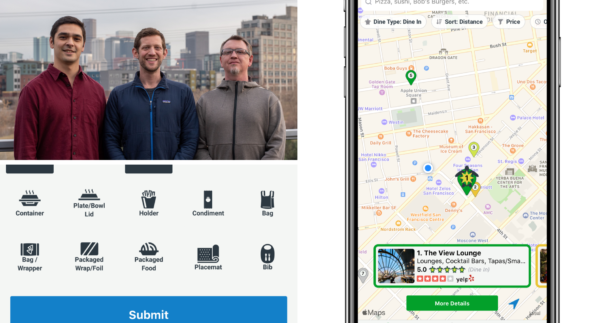 As Denver restaurants are forced to offer their food to go, a new app developed locally wants customers to start paying attention to the single-use plastic that comes with it.

PlasticScore, which wants to make the industry more environmentally friendly, launched Wednesday, two days after the city’s restaurants were ordered to close, with the exception of delivery and carryout orders. That order extends through May 11.

“We reached out to some of our (beta) users and we got a pretty big response that this is something we should go forward with,” said Mladen Gajic, PlasticScore founder and CEO. “(We want) to find a positive way to help restaurants and limit the amount of plastic waste in this unprecedented time.”

PlasticScore is available nationwide through both iTunes and Google Play.

Once downloaded, users search it for a restaurant and are prompted to answer questions, such as what did you order, what was the container or dish made from and did you have the option to recycle.

The app allows users to rate restaurants based on their single-use plastic. Restaurants get a one to five turtle rating.

Based on the answers, a score of one to five turtles, instead of stars, is given to the restaurant. Paul Fuqua, co-founder and chief operating officer, said having the app calculate the score makes the process more objective.

PlasticScore also is building a dashboard for restaurant owners to view their score and learn ways to improve it. Gajic said this could be as easy as not giving out utensils and napkins with to-go orders.

“We produce a ton of waste. And you have to figure out how to get the general public more involved and try and make it easy,” he said. “Make it baby steps. Try to not have as much shame in it, but more, ‘Hey, this is a way you can improve’ and try to put a positive message on it.”

Gajic, Fuqua and Chief Technology Officer Tim Furlong came up with PlasticScore last May at a Techstars Startup Weekend in Boulder.

Fuqua said he hated going out with his family because often his only choice was to throw recyclable materials in the trash. He thought they should do something about it.

Prior to PlasticScore, Furlong was a software developer for Lockheed Martin, Fuqua was an IT manager for United Launch Alliance and Gajic, whose background is in engineering and project management, was traveling. Gajic started working on PlasticScore full time after the Techstars weekend, and Furlong and Fuqua joined full time in late July or early August.

The company, which has offices at Commons on Champa in downtown Denver, is primarily self-funded by the founders. PlasticScore did, however, receive assistance from Techstars, including free membership, free promotion and two months of free office space at WeWork.