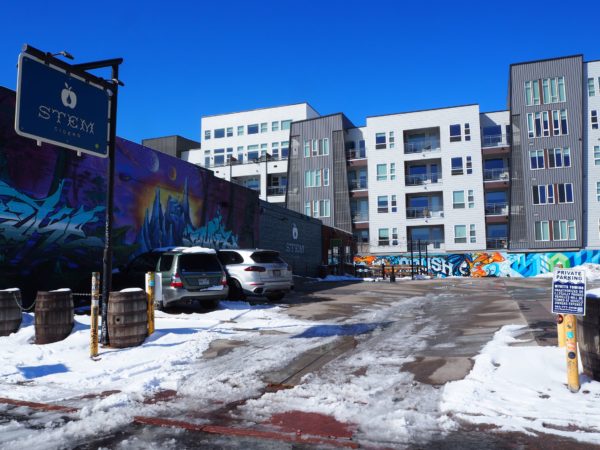 A view of the parking lot next to 2811 Walnut St. on Tuesday. (Thomas Gounley)

The view from the patio of Stem Ciders in RiNo is about to get more exciting.

Right now, patrons enjoying a drink at the business at 2811 Walnut St. look over a concrete parking lot. By the end of the year, however, there should be trees, a pergola and a water feature, along with what the lot’s owners are calling “incutainers.”

The changes are coming courtesy of John and Tai Beldock, who own the entire west side of the 2800 block of Walnut Street. The couple operate their motorcycle dealership Erico Motorsports at the north end of it.

The Beldocks know they’re not developers, and they’re not planning to construct any new structures. Instead, they’re focused on rehabbing what they have into a project they’ve dubbed “Octane Alley.” It will revolve around converting that parking lot into a pedestrian-friendly green space, something they noted is lacking in the area.

“For two people who are really just into motorcycles, this is huge,” Tai Beldock said. 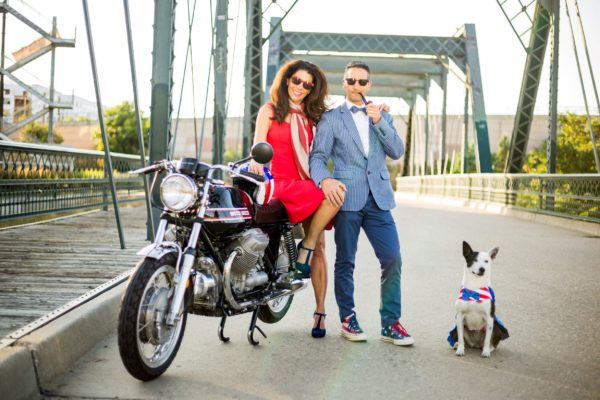 John Beldock founded Erico in 1993, and moved the business to its current location in RiNo in 1999.

The Beldocks, who got married in 1999, purchased the block in stages ending in the 1990s and early 2000s, before RiNo really began to boom. While the existing buildings are single-story, the site is zoned for up to five stories, and the couple said they’ve been regularly approached by developers.

“It’s important to us to have good neighbors and maintain the vibe of RiNo,” Tai said, adding that to her, that means not demolishing the existing structures.

Erico, Stem and Altitude Brewing & Supply are the block’s only tenants, and all three will be staying through the changes.

The other buildings on the Beldocks’ side of the block — at 2801, 2811 and 2845 Walnut St. — were previously home to a number of businesses, most recently 14er Brewing, Yeah Baby and Booz Hall RiNo.

Those buildings have been gutted and are being marketed for new tenants by brokers Ken Himel and Shawn Peel, of David, Hicks and Lampert. Combined, the buildings have about 11,700 square feet across what the owners see as five separate units.

“The majority of it we would like to see filled with food and beverage, because we see it as a gathering space,” Tai said. 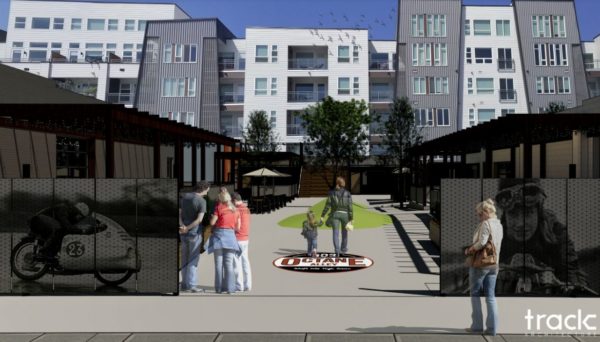 A rendering showing the transformed parking lot next to 2811 Walnut St. once Octane Alley is completed. (Courtesy Tai and John Beldock)

A few of the improvements for Octane Alley will extend along the block: new sidewalks (a feature that’s not a given in RiNo), and new curbs and gutters.

The bulk of the changes, however, are slated for the parking lot between the buildings at 2811 and 2845 Walnut St.

Plans call for two new patios to be added outside each of those structures for use by future tenants. Trees and other greenery would be planted between walkways in the common area.

About six shipping container-like spaces, meanwhile, are slated to be installed along the periphery. The idea is that these small “incutainers,” as the Beldocks call them — a combination of “incubator” and “container” — would land additional food and beverage tenants, and essentially act as stationary food trucks.

A deck also is slated to be installed over a portion of the space, adding additional seating. The Beldocks hope to be among the first venues in Denver to get a common consumption license, which would allow patrons to take alcoholic beverages outside the designated patio areas.

As the name suggests, the venue will have a motorcycle theme. The pergola in the center will be shaped like a motorcycle wheel, and behind a water feature toward the back of the space would be a photo of Beryl Swain, the first solo female to complete the famous Isle of Man TT race. A small stage area in front could support live music.

Artwork also will be a feature.

“The art is what made this neighborhood,” Tai said.

John Beldock estimated the total cost at about $6 million. The couple hope to have the work completed this year. Track Architecture is the project architect. Ivy Street Design is the landscape architect.

A view of the parking lot next to 2811 Walnut St. on Tuesday. (Thomas Gounley)

The view from the patio of Stem Ciders is about to get more exciting.