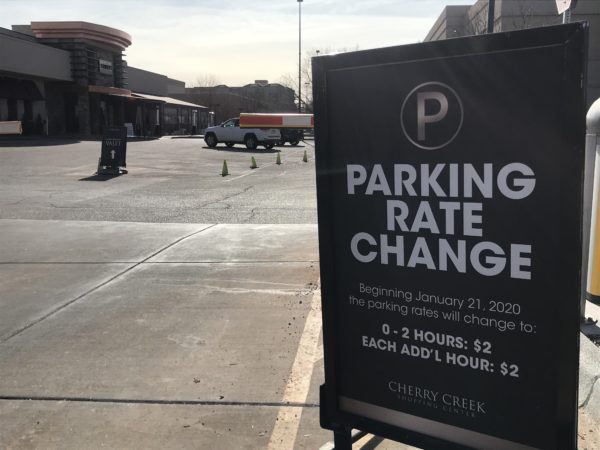 Come Jan. 21, Cherry Creek Shopping Center will no longer allow customers to park in its garages and surfaces for an hour for free. (Cassidy Ritter)

Even that quick trip to return something to Nordstrom is going to cost you.

Come Jan. 21, Cherry Creek Shopping Center no longer will allow customers to park in its garages and surfaces for up to an hour for free.

Instead, the mall will charge $2 for parking up to two hours, and another $2 for each additional hour, according to signage posted on Monday at mall entrances. 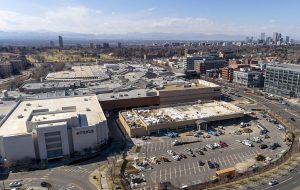 This file photo shows crews renovating the east side of Cherry Creek Shopping Center. The work has since been completed. (Guerilla Capturing)

The mall began charging for parking in 2017. Those rates, which remain in place through the 21st, are free for up to one hour, $3 for up to two hours, $4 for up to three hours and $2 for each additional hour after that.

Mall General Manager Jeramy Burkinshaw, who took over that position in November, said some customers park and go elsewhere in the neighborhood. The mall wants to ensure it has spaces for its own shoppers.

Burkinshaw said most shoppers are at the mall between one and two hours. He noted that category soon will pay $2, compared to $3 now.

“This change is going to benefit our average shopper,” he said.

Come Jan. 21, Cherry Creek Shopping Center will no longer allow customers to park in its garages and surfaces for an hour for free. (Cassidy Ritter)

Come Jan. 21, all customers will pay to park, even if it’s a quick trip. “This change is going to benefit our average shopper,” the mall’s general manger said.