The husband-and-wife team behind Colorado’s biggest climbing gym chain said this week that they have sold the company to a private-equity-backed firm that owns a competing gym.

Movement Climbing + Fitness founders Anne-Worley and Mike Moelter, who opened the gym in Boulder in 2009 and added locations in Baker in 2012 and RiNo in 2018, said that Movement will combine with Earth Treks and become part of holding company El Cap.

“We’re a mom-and-pop operation and we have been doing this for 12 years,” Mike said. “We were ready for a life change, and a change in perspective.”

The Moelters declined to disclose financial details of the transaction, saying just that they will be investors in El Cap as part of the deal. Anne-Worley will take one of six board seats at El Cap. Mike will work on real estate development and scout locations for future gyms. 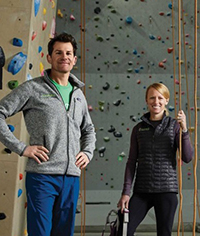 Mike said he and Anne-Worley were going through a strategic planning process in the last year when someone from El Cap suggested combining operations.

“We saw the greater sum of the parts than just being independent, whether that’s benefits for our employees, growth opportunities or more access to climbing facilities for our members,” Mike said.

The Moelters bought land and developed the locations in Denver along with their investors. The real estate is not part of the deal.

Starting later this month, Movement and Earth Treks customers can attend either company’s locations, all of which offer fitness classes in addition to top roping walls and bouldering routes. With the Movement deal, El Cap will operate 16 climbing gyms around the country. Two more are under construction.

Anne-Worley said that neither Earth Treks nor Movement are changing their names immediately.

“El Cap Group is having conversations about what a unified brand might look like, but no decisions have been made,” she said.

Movement has around 160 employees. Each gym draws around 1,000 customers a day in the winter, according to the company.