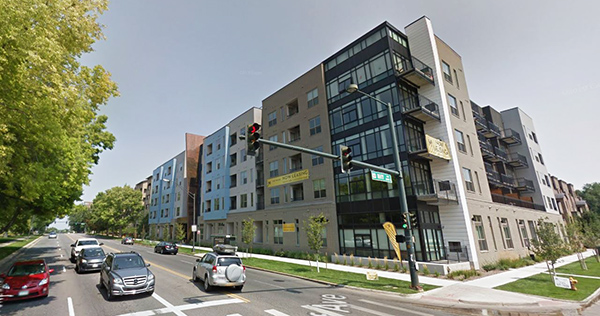 Apartment complex The Muse is located at 2270 S. University Blvd. in Denver.

An apartment complex across the street from the University of Denver has changed hands.

The five-story complex at the corner of University Boulevard and Iliff Avenue was sold by Greenwood Village-based developer Hill Cos., which paid $4.2 million for the 0.88-acre site in September 2014, per records.

Architecture firm Kephart designed the project. The Muse has 120 units, according to the firm’s website, which makes last week’s sale worth $405,833 a unit.

The building contains studios, and one- and two-bedroom units, and was designed “to have the look and feel of a boutique hotel” and “with discerning graduate students in mind,” according to Kephart.

The cheapest one-bedroom unit at The Muse rents for $1,621 a month, according to the complex’s website.

Apartment complex The Muse is located at 2270 S. University Blvd. in Denver.