An insurance brokerage that last year purchased a new home for itself in the Denver Tech Center has moved in.

CCIG took over the top two floors of the three-story structure at 155 Inverness Drive West in Englewood in late August. The company bought the building in February 2018 for $8.5 million, according to public records, and began renovations on its space this spring.

“It really was a stem-to-stern renovation,” said Allen Greenberg, a company spokesman. “This wasn’t just about painting the walls and putting in new carpets.” 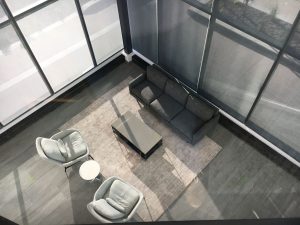 A common area within the building.

Renovations included the installation of conference rooms as well as smaller “huddle rooms” intended for smaller meetings, as well as a wellness room, and cafe and coffee bar space, complete with beer tap.

The building also has gotten larger. CCIG, led by CEO Brook Mahoney, added about 2,400 square feet to the second and third floors.

The building is approximately 45,000 square feet, about double the space of CCIG’s previous office within Triad at Orchard Station, at 5660 Greenwood Plaza Blvd. in Greenwood Village. CCIG leased that space.

For now, the company isn’t using all of the structure. The first floor of the building is leased to nonprofit mental health provide AllHealth Network. 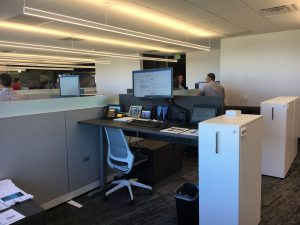 In moving to Englewood, Greenberg said the goal was to “invent a workspace that we think is best suited for the folks we hire.”

“You can’t really check all the boxes when you lease,” he said.

While Greenberg declined to disclose specific revenue figures, he said the company has increased annual revenue 144 percent and nearly doubled its employee count to 95 in five years. The company figures it can fit 150 to 160 in the entire building.

CCIG has more than 7,500 clients nationally and abroad, and billed premiums totaling $135 million in 2018, Greenberg said.

CCIG, led by CEO Brook Mahoney, has about 95 employees and says revenue has grown 144 percent in five years.