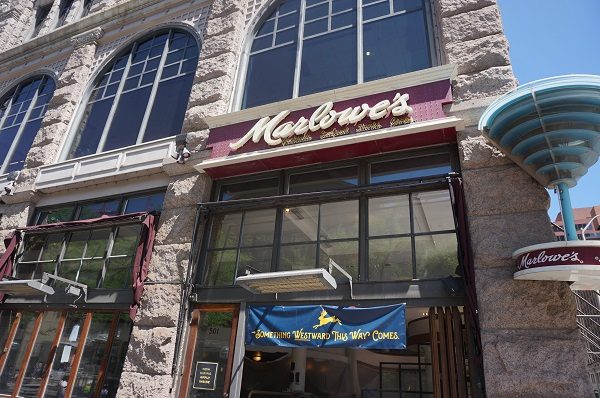 West of Surrender Saloon & Kitchen is preparing to open in the former Marlowe’s space at 501 16th St. in downtown Denver. (Libby Flood)

A new restaurant has laid claim to the former Marlowe’s space along the 16th Street Mall.

West of Surrender Saloon & Kitchen is preparing to open at 501 16th St., where steakhouse Marlowe’s operated for 36 years prior to its late-December closure.

While the unit at 501 16th St. for now features only a somewhat-cryptic banner that reads “Something Westward This Way Comes,” the restaurant has established a website and has a job posting up on Craigslist.

The job posting said the restaurant will serve “food and drink from the American West made modern.” A reporter’s Friday email to the address listed on the restaurant’s website, requesting to speak with someone about the concept, resulted only in a message stating that more details would be released soon.

Scott Burnham is the restaurant’s executive chef, as well as a partner in the business, according to his LinkedIn profile. He previously spent more than six years at Le Merise French Bistro in Cherry Creek, and more recently has been executive chef at Boulder’s Greenbrier Inn, according to the profile.

Marlowe’s owner and operator Premiere Ventures closed the restaurant and three others in Denver — the adjacent Paramount Cafe, Govnr’s Park Tavern and Lala’s Wine Bar + Pizzeria — in the final four months of 2018.

West of Surrender Saloon & Kitchen is preparing to open in the former Marlowe’s space at 501 16th St. in downtown Denver. (Libby Flood)