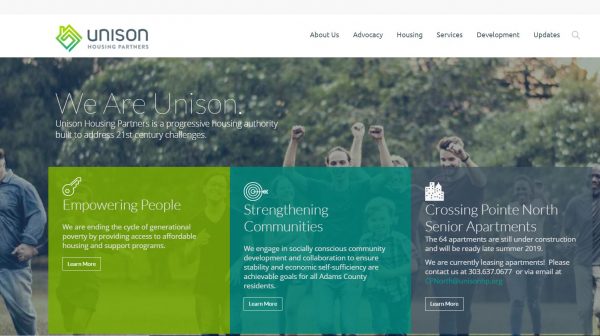 They’re in unison, and apparently that’s a problem.

A year after changing its name to Unison Housing Partners, the Westminster-based entity formerly known as Adams County Housing Authority is being sued by another company that also uses the kumbaya-esque moniker.

It wants a judge to rule the housing authority can’t use the word.

In an emailed statement, Peter LiFari, executive director of Unison Housing Partners, said he was “shocked” that the lawsuit was filed because he’d already been in communication with the company.

A screenshot of the website of San Francisco-based Unison.

“While it is our position that we are not infringing their trademark, we have been working diligently with our board of directors and legal counsel to determine a mutually beneficial solution in an effort to avoid distracting legal action,” LiFari said. “Our last communication with this company was earlier this month. We alerted them of our review of their settlement request.”

The California-based Unison says on its website that it makes “home co-investments,” offering homebuyers’ money in exchange for an ownership stake in the property, unlike a traditional home loan.

The company, founded in 2004, said in its lawsuit that it has multiple approved or pending trademarks for the use of “Unison” in connection with “an array of services within the field of residential real estate.”

Adams County Housing Authority, meanwhile, rebranded itself as Unison Housing Partners in March 2018. The organization, which develops and manages income-restricted housing in the county northeast of Denver, said the new moniker reflects its “progressive approach to housing.”

“Our nonprofit organization does not provide similar services or compete in any way with the for-profit financial entity in San Francisco,” LiFari said in his statement. “We are a quasi-governmental agency focused on affordable housing development and management.”

LiFari said his organization first received a request to change its name from the California company in January.

The California company is represented by attorney Kevin Bell of the Denver office of Kilpatrick Townsend & Stockton, as well as Ryan Bricker of the firm’s San Francisco office.

The two companies are in unison, and apparently that’s a problem.