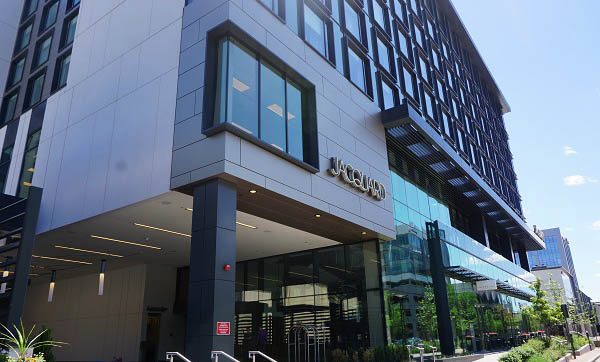 The Jacquard hotel in Cherry Creek. Photo by Libby Flood.

A Cherry Creek construction billing dispute has escalated from lien to lawsuit.

Denver hotelier Stonebridge Cos. this month sued the general contractor who built its Jacquard hotel over a $10 million billing discrepancy.

Turner, which built Mile High Stadium 20 years ago and is currently working on Meow Wolf’s Denver home, finished the hotel project in October 2018, “nearly a full year behind schedule,” according to the lawsuit. Turner then filed a lien against the property, which was amended in April to $7.7 million.

Stonebridge, acting as CCN Lodging LLC, said in the lawsuit that it has paid Turner $55.4 million for its work on the project, and that Turner actually owes it $2.3 million in “liquidated damages.”

The lawsuit claims that Turner was supposed to follow a “cost-plus” billing model, meaning Stonebridge “agreed to pay for actual project costs, such as labor and materials, plus a fixed fee to Turner for its overhead and profit – all subject to a guaranteed maximum price.”

The lawsuit said that Turner’s $7.7 million lien is more than Turner’s internal records tallied by more than $1 million. Stonebridge is asking the court to void the lien on account of that overage.

Turner is not the only vendor to file liens against the hotel developer for the Jacquard. There are also liens from Kenney Electric ($495,000), RK Steel ($250,000) and Standard Interiors ($245,000), according to public records.

The Jacquard hotel in Cherry Creek. Photo by Libby Flood.

A Cherry Creek construction billing dispute has escalated from lien to lawsuit.