One of the sites is currently home to a shuttered strip club. (BizDen file photo)

Denver has selected two different developers to build income-restricted housing on two sites along East Colfax Avenue, and their plans call for a total of 155 units.

The city said Tuesday that it has chosen Mercy Housing Mountain Plains to build on the adjacent 8315 E. Colfax Ave. and 1500 Valentia St. lots, currently home to a shuttered strip club.

Brothers Redevelopment Inc., meanwhile, has been chosen by the city to build at 7900 E. Colfax Ave. There are currently no structures on the site.

The city purchased both sites separately in 2017, paying $1.3 million for 8315 E. Colfax Ave. and $650,000 for 7900 E. Colfax Ave. The city issued requests for proposals for the sites — which are zoned for up to five stories — last year, specifically seeking developers that would build income-restricted housing.

Mercy Housing Mountain Plains is expected to develop approximately 83 units at 8315 E. Colfax Ave. and 1500 Valentia St., according to the city. The one- to four-bedroom units would be restricted to individuals or families making, at most, 80 percent of the area median income — up to $52,000 for a single-person household or $74,250 for a family of four. Initial projections call for 17 units to be restricted to those earning up to 30 percent of the area median income.

The development also is slated to incorporate ground-floor commercial space, which would be leased to a provider of early childhood education services, the city said.

At 7900 E. Colfax Ave., the city specifically sought a developer who would construct a “supportive housing” project serving individuals who have been homeless. Brothers Redevelopment is expected to build a 72-unit project, and to partner with Brain Injury Alliance of Colorado in order to focus on providing housing to homeless people with brain injuries. The organization would have an office on the ground floor.

In addition to providing land for the future housing sites, the city intends to provide gap financing to each partner following the awarding of tax credits. Gap financing greater than $500,000 will be subject to City Council approval. 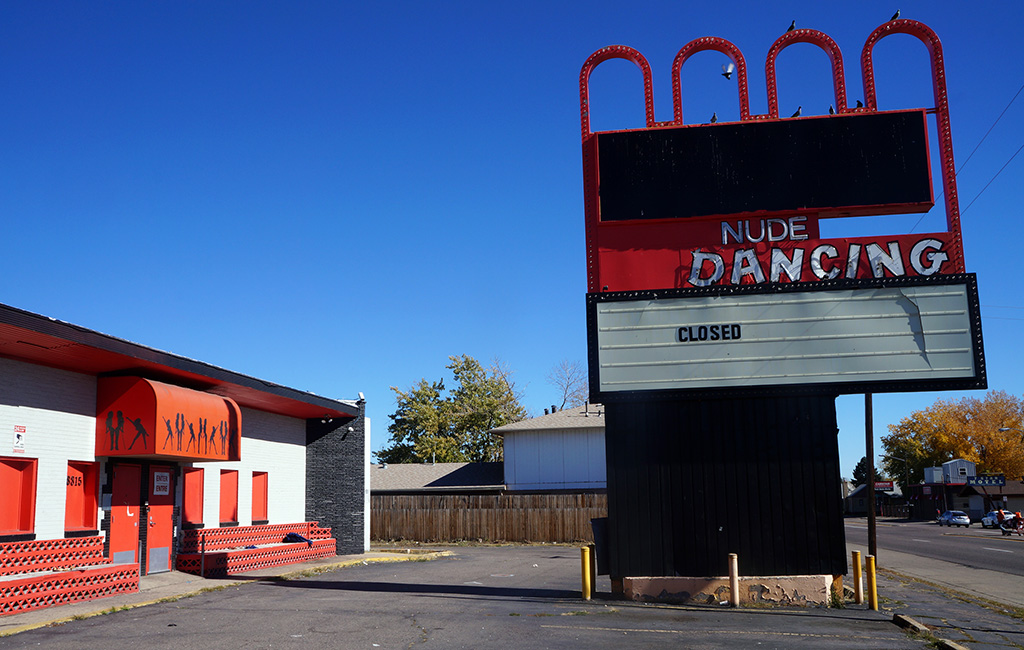 One of the sites is currently home to a shuttered strip club. (BizDen file photo)

Both developers hope to complete their projects in 2022.