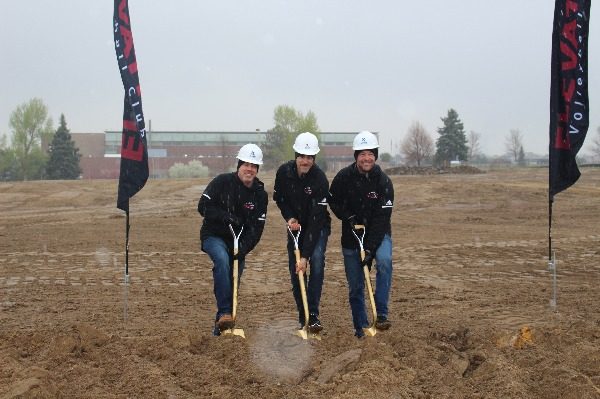 Players soon will be serving aces at a new volleyball facility in Denver’s southern suburbs.

“We just outgrew the space and wanted to take the next step and branch out,” Burrell said.

A rendering of the exterior of the new volleyball facility. Click to enlarge.

Burrell said the sport is “huge” among kids, with 450 of them typically participating in Elevation’s six-week youth league seasons. Elevation also has 16 girls and four boys competitive club teams, with seasons that run from November to April.

Burrell said he expects interest among boys to grow now that boys’ volleyball became a sanctioned high school sport in Colorado this spring.

Burrell played club volleyball at the University of Northern Colorado. He also coached girls’ high school volleyball at Ponderosa High School for 16 years, and Elevation’s other co-founders, Kevin Snyder and Rob Graham, coached with him for some of those years.

“We kept getting kids into the program that said they played club and they weren’t trained well,” Burrell said.

“It just so happened that an opportunity came about where there was a facility that we could sublease from a company that already had courts in place,” Burrell said. “We could get in without much cash for equipment. We needed to either do it or stop talking about it.”

They started the club in 2012. Burrell said Elevation Volleyball has helped 25 players go on to play college volleyball.

Elevation’s new facility, which sits on 3.5 acres, will cost approximately $4.8 million, including the land purchase and construction, which the club is funding through the SBA loan program and three private investors, according to Burrell. Elevation has hired Kahn Construction and the Farnsworth Group for the buildout, and expects construction to be complete by year-end.

“It’s so competitive that athletes have to play year-round,” he said. “We’re experiencing growth there because of our training and consistency of training.”

The Denver metro area has had a few sport complexes pop up in recent years, including the Randy Ross Tennis Center, also in Centennial, the Parker Racquet Club and The Courts Sports Complex in Northglenn.

Elevation Volleyball Club, founded in 2012, is leaving leasing behind and spending $4.8 million on its new home.