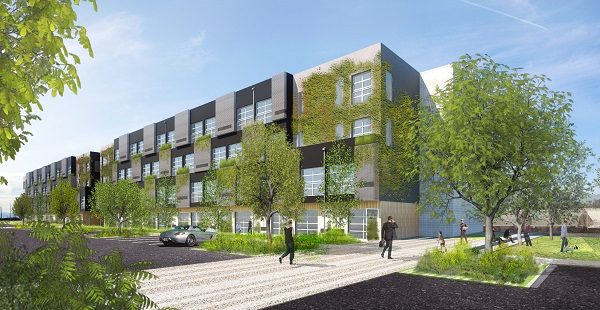 A rendering of Kabin, a 194-unit apartment building going in at the Taxi campus. (Courtesy Dynia Architects)

Zeppelin Development has begun work on a four-story apartment project on the edge of its Taxi campus, and hopes that companies ultimately will sign on the dotted line for many of the units.

The 194-unit project is being built at 2101 31st St., on a narrow parcel wedged between railroad tracks and a Regional Transportation District building. Zeppelin Development purchased the site in May 2015 for $1.8 million.

Although crews already have been working at the site, a formal groundbreaking ceremony is slated to be held Wednesday evening.

The building is branded Kabin, the Nordic version of “cabin.” Zeppelin Development President Kyle Zeppelin said the name, while “not overly literal,” is intended to reference its Scandinavian design elements, and “that lifestyle of cozy inviting spaces, community and warm wood elements.”

“It’s really intended to fill a need in the market,” Zeppelin said.

Zeppelin’s original plans for the site, outlined in a 2016 BusinessDen story, called for 288 income-restricted units to be built with the help of federal low-income tax credits. The company, however, was unable to secure them.

“That funding has continually gotten more scarce,” Zeppelin said. “We don’t really have an appetite to wait around for years.”

“It’s unfortunate, because there’s definitely a need for more of that subsidized, affordable housing.” 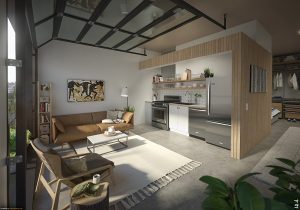 A rendering of the inside of one of the units. Nearly all the building’s units will be 420-square-foot one bedrooms. (Courtesy Seven G)

Without those credits, the company lowered the number of units in the project. Nearly all the apartments — 179 of the 194 — will be one-bedroom units, sized 420 square feet. Facing out from the units, instead of normal windows or a sideways-sliding glass door, there will instead be a glass garage door that slides up and into the units.

“That’s going to be a signature feature,” Zeppelin said.

Zeppelin hopes that many residents won’t actually pay that amount, however. The company is targeting local companies, particularly those that work in its office space in the Taxi complex, in the hopes that some of them will lease blocks of units, then turn around and rent them to employees at approximately a $500-a-month discount.

The idea is that companies will want in as part of their efforts to attract and retain the best employees. At this point, Zeppelin Development doesn’t have any companies signed on to take units, but Kyle Zeppelin said initial conversations have been positive. He acknowledged the model is “still an unproven idea.”

Zeppelin said he expects that some units still will be rented out to individuals in the traditional way. 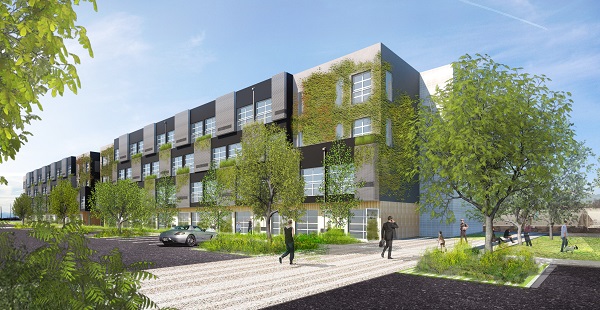 A rendering of Kabin, a 194-unit apartment building going in at the Taxi campus. (Courtesy Dynia Architects)

The developer hopes that companies ultimately will sign on the dotted line for many of the units.