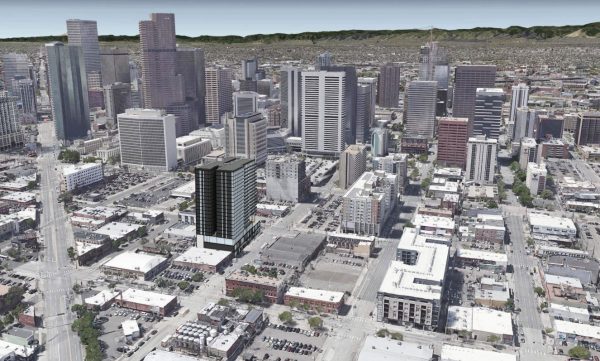 Property Markets purchased several adjacent parcels in two deals in January and February. The company paid a total of $9.9 million for the 0.58 acres it now controls in the 2100 block of Arapahoe St., or $395 a square foot. 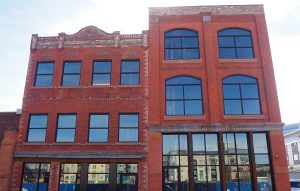 The building would have some retail space on the first floor, and the second floor is described in plans as “workspace.” The third floor would be devoted to resident amenities, including a fitness center, dog run, coworking space, pool and hot tub.

The fourth through 21st floors would house the apartments.

Property Markets didn’t respond to a request for comment on the development timeline.

There are several existing buildings at the site: a low-slung commercial building that houses Dead Drift Tattoo and a convenience store, and three-story buildings at 2126 and 2130 Arapahoe St., which date to the late 1800s. (The history of the latter two buildings is discussed in this January report by city staff).

Renderings of Property Markets’ project submitted to the city indicate all the existing buildings would be demolished. But Annie Levinsky, executive director of nonprofit Historic Denver, told BusinessDen Wednesday that the organization has met with the developer and Councilman Albus Brooks to discuss the possibility of incorporating the 2126 and 2130 buildings into the project. Levinsky said the developer was “receptive” and indicated they would consider the idea.

Property Markets is already active in Denver, owning 3000 and 3100 N. Inca St. in Union Station North, the somewhat-isolated neighborhood north of Coors Field. The company is building a 12-story apartment complex on each of those parcels.

All of the apartment complexes are set to be branded X Denver, part of Property Markets Group’s X Social Communities portfolio. The communities rent both by the unit and by the bedroom, according to the brand’s website.

Property Markets Group’s apartment building would have 392 units, according to plans submitted to the city.