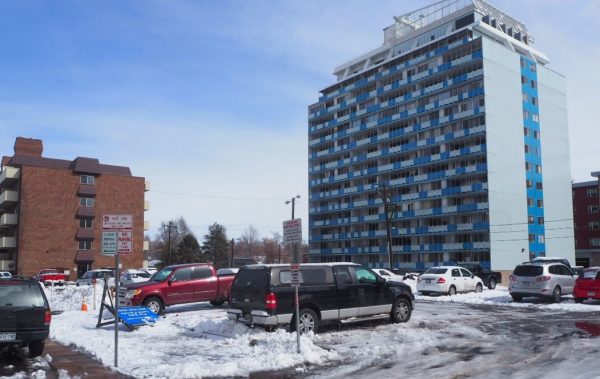 The parking lot at 1122 N. Albion St. in Denver, along with a smaller lot across the street, sold for $1.06 million. (Thomas Gounley)

A pair of parking lots just north of the 9th and Colorado project in Denver’s Hale neighborhood have sold, and redevelopment is planned.

Cooke said he plans to build an apartment building on the 1122 Albion parcel, although he’s still determining how large it will be.

He said the site is zoned for up to 12 stories, but that he doesn’t plan to build that high. The other residential structures along the street range from six to nine stories.

The parcel Cooke bought on the opposite side of the street will remain a parking lot.

Cooke said proximity to the 9th and Colorado mixed-use project, which is being built by Continuum Partners and CIM Group just south of the site, was a selling point.

“You’ve got the Continuum project, and we’re literally adjacent to it,” he said. “We like to work on infill sites and redevelopment projects.”

Insignia Homes has built homes across Colorado, according to its website. In Denver, the company is currently working on townhome projects at 17th and Julian streets in West Colfax, and in the 4400 block of Tennyson Street in Berkeley.

The lots were sold by Xenocorp LLC, which had owned them for decades.