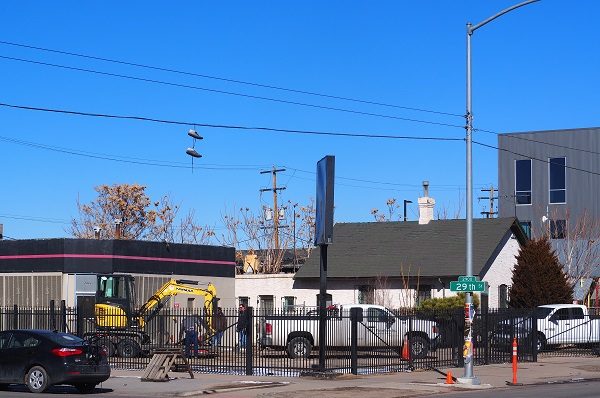 Chicago-based bar and restaurant group Four Corners paid $3 million for 2903 Larimer St., a parcel with two structures on it. (Photos by Thomas Gounley)

A bar and restaurant group that owns and operates 15 venues in Chicago is expanding to the Mile High City.

Chicago-based Four Corners plans to build a restaurant on the corner lot at 2903 Larimer St. The company purchased the site on the same block as Shake Shack last week for $3 million, according to county records.

Four Corners co-owners Matt Menna and Andy Gloor are both partners with Chicago-based powerhouse developer Sterling Bay, whose projects include a $6 billion redevelopment proposal for a 55-acre site in the city known as Lincoln Yards.

The 15 venues that Four Corners owns and operates in the Chicago area are independently branded, ranging from taco joint Federales to neighborhood sports bar Gaslight and game lounge Hi-Point. Four Corners also has an ownership stake in several other establishments, including high-end Chinese restaurant Tao Chicago and the local Small Cheval burger chain.

Menna said the establishment opening in RiNo, which Four Corners will both own and operate, will be “an extension of one of our existing concepts” in Chicago. He said that Four Corners hasn’t determined which concept it will emulate, and that the restaurant won’t necessarily share a name with an existing Chicago venue.

“We like to independently brand,” he said. “We haven’t done a repeat before.”

The parcel is 0.29 acres, making the deal worth $240 a square foot for the land. The property is home to a former auto repair shop and gas station, as well as a home. It is zoned I-MX-3, allowing up to three stories. 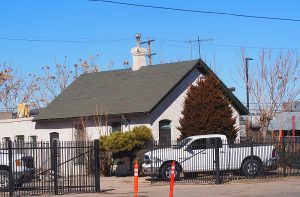 Menna said Four Corners’ restaurant will be one or two stories. It’s possible the redevelopment plans could incorporate the home, he said, but the auto repair shop will be demolished.

Menna said the company hopes to begin construction in the third quarter of this year, and open in the second quarter of 2020.

Denver is the first market outside Chicago where Four Corners is expanding, but it likely won’t be the last; Menna said the company is looking at 10 others.

Menna said Four Corners looked at sites in Denver — more specifically, in LoHi, LoDo and RiNo — for two to three years before settling on Larimer Street.

The property was sold by Michio Iwahashi, according to records. Todd Snyder and Evan Makovsky with NAI Shames Makovsky represented the seller. Snyder said the property had been owned for decades by the same family, which also operated the auto repair business, which it closed at least five years ago.

“It’s a great corner,” Snyder said. “It’s arguably one of the best corners that’s left in that particular market.”

Chicago-based bar and restaurant group Four Corners paid $3 million for 2903 Larimer St., a parcel with two structures on it. (Photos by Thomas Gounley)

Four Corners owns and operates 15 venues in the Windy City. The concept of the restaurant coming to RiNo hasn’t been finalized.