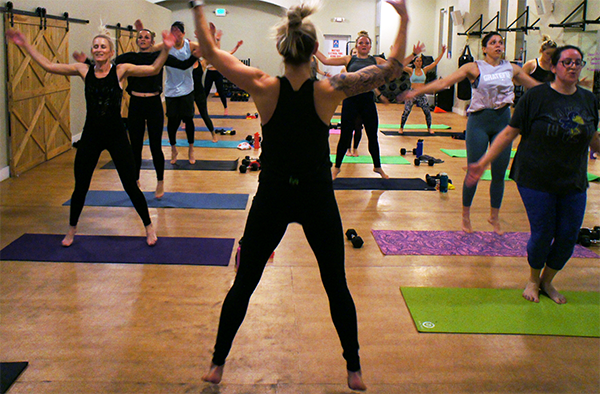 Duality, a new yoga and fitness studio, is opening next year at 4635 W. Colfax Ave. (Courtesy of Duality)

Jen Sevcik and Tim Samp, who met at a CorePower teacher training (Samp was the instructor), are targeting a February opening for Duality, the fitness studio they’re launching in 2,700 square feet at 4635 W. Colfax Ave.

“We did a lot of research and found most people are looking in their one-mile radius,” Sevcik said. “They really want to be central in order to maximize their memberships. There’s one or two small boutique and/or franchises in this area, but truly no yoga and no one who’s trying to do both.”

Samp, 37, has been in the fitness industry for seven years, managing studios for Corepower for the last five. Sevcik, 34, has worked in medical sales for 11 years, but has taught CorePower Yoga classes for the past few years. Duality’s third owner, Nattiel Pierson, also has taught with CorePower and Yoga Pod.

The owners decided to launch their own studio and signed a 10-year lease for the space, which is two blocks south of Sloan’s Lake between Sheridan Boulevard and Tennyson Street.

“This is the right space,” Samp said. “We wanted to be as early in the market as we can.”

Duality members will get access to heated vinyasa classes, with enough space to fit 40 mats, Samp said. The studio also will teach a resistance and conditioning class on yoga mats that includes dumbbells and resistance bands.

In the studio’s other room, Duality will offer high-intensity circuit classes with TRX bands, kettlebells, boxes, slam balls and other equipment. The studio also has purchased Ski Ergs, upright rowers that mimic the arm movements of a cross country skier, as well as eight treadmills.

“We invested a pretty penny into that equipment,” Sevcik said. “These are top-of-the-line Olympic training pieces of equipment. You know that you’re on state-of-the-art equipment.”

All Duality classes will last 60 minutes. Unlimited memberships will cost $145, with founders’ memberships coming in at $120. The couple plans to hire 10 to 15 instructors.

Duality, a new yoga and fitness studio, is opening next year at 4635 W. Colfax Ave. (Courtesy of Duality)