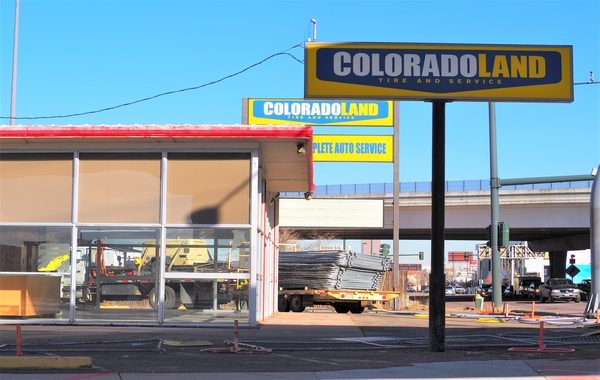 Coloradoland Tire & Service has closed at 887 S. Broadway. The building is slated to be demolished. (Thomas Gounley)

A tire shop near the Interstate 25-South Broadway interchange has closed, and the building is slated to be demolished in the coming weeks.

Coloradoland Tire & Service closed at 887 S. Broadway on Oct. 19, according to the company’s website. The lot was fenced off last week.

The property, 887 S. Broadway, is owned by Broadway Station Partners, which owns 41 acres between Broadway and Santa Fe Drive south of the interstate, and plans to sell sites to developers for office, retail and residential projects.

The site is generally south of RTD’s I-25 and Broadway station. Gates Corp. previously operated a rubber manufacturing facility at the site; it was demolished starting in 2013.

Rocky Mountain, a managing member of the ownership entity, said the former tire shop is slated to be demolished in December or January. He said the city ultimately wants to reroute Kentucky Avenue through the site. The road, which allows access to the RTD station, currently runs just south of the tire shop.

Mountain noted there are three traffic lights in rapid succession along Broadway at the interchange.

“By relocating Kentucky, just moving it 100 feet north, the city can get rid of one of the traffic lights,” he said.

Mountain said he wasn’t sure when the road relocation will take place. He said Coloradoland Tire could have continued operating at the site for some time, but that the company made the call to close last month.

Coloradoland has six other locations in the metro area. In a message on its website, the company said staffers of the South Broadway location now are working at a Denver Tech Center location, but, “We are also engaged in an effort to find a suitable location nearby that we hope to re-open in as soon as possible.”

Mountain said Broadway Station Partners has begun work to prepare the site for development, including building a retention pond and removing the former buildings’ foundations.
“Those guys were big believers in concrete and rebar,” he said. 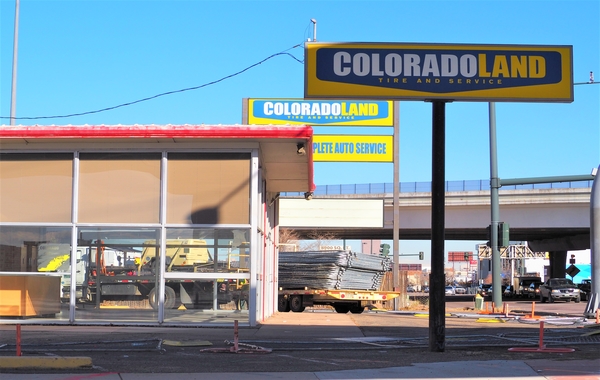 Coloradoland Tire & Service has closed at 887 S. Broadway. The building is slated to be demolished. (Thomas Gounley)

The property is owned by Broadway Station Partners, which is preparing a 41-acre former industrial site to the south for redevelopment.