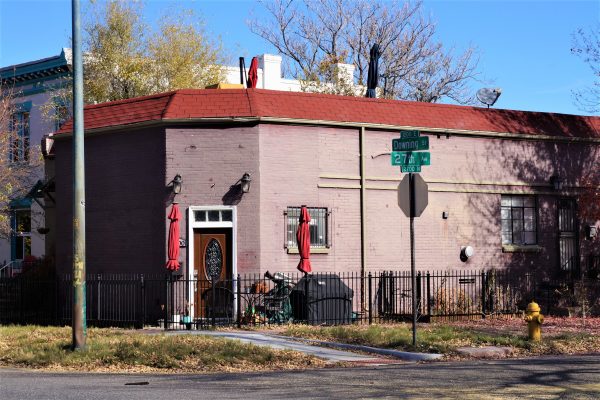 The Zillow listing advertised a two-bedroom apartment on the edge of Five Points for $1,595 a month. (Thomas Gounley)

The real estate website removed the listing for a two-bedroom unit at 2700 Downing St., on the edge of Five Points, on Thursday.

A Zillow spokesman said in an email that the listing violated the website’s “Good Neighbor Policy,” which forbids “discriminatory, abusive, obscene, threatening or libelous content.”

Zillow reviewed the listing after a BusinessDen reporter posted a link to it on Twitter, and quoted some of the contents. The tweet was not directed at the company and did not call for the listing to be removed.

The listing was authored by an individual who called himself Danny, which matches the first name of the person who owns the house, according to property records. He did not respond to a request for comment.

The listing, which offered the 950-square-foot unit for $1,595 a month, started out fairly typical, touting the property’s “rooftop deck that rocks,” “stainless appliances” and “hardwood floors throughout.”

“This is right on the edge of the RINO District, and all the awesomeness that it has to offer, without the crazy prices,” the listing said. “Ride your bike to a Rockies game, it’s a ten minute ride. Black Shirt Brewing is a five minute ride.”

From there, things got a little more unusual.

On dogs: “No pet rent because I love critters, but definitely a fully refundable pet deposit. If you are a good pet owner, I’ll happily, happily give it back. If you’re one of those doucheclowns that thinks their dog is a partner and don’t understand why everyone doesn’t get why your dog eats the blinds and craps on the floor everywhere you go, we aren’t going to get along. Dogs don’t train themselves, princess. You’ll meet my dogs when you swing by. They’re happy and they listen, and they won’t poop on you.”

On modern communication: “Please feel free to call or email any time. I suppose shoot me a text if you don’t like talking and insist on being the quintessential millennial. Ya’ll got a bad rap if you ask me. Why talk to someone when you can type little letters on a lil screen and be impersonal?”

On cigarettes: “My units are 100% non smoking. Smokers, you stink. And your hair is gonna be yellow. Kissing you SUCKS, and so does living in the trailer park with you. This isn’t 1957, you are not, and certainly do not, look cool. If you smoke cigs DO NOT CALL ME. You will be part of a mrdr/su*cide if you smoke inside the house. Guess which part, and I’ll do my time in style, beyatch.”

On pot: “I don’t mind the pot thing, mostly because the tar doesn’t stick to everything. Just make sure you get your as* out of bed and go to work, stoner. We all have bills!”

On landlord-tenant relations: “I believe in a non corporate style, big surprise. You’re paying the mortgage, and if you’re cool to me, I’ll be cool to you. A day or four late with rent, no worries. Just let me know. Want something? No problem, I want you happy. Oh, you slip up and smoke inside? No worries, I default to black coffins.”

On showings: “I’ll have beer at showings. Be thirsty.”

A Zillow spokesman said the listing was up for about a week before being removed.

The Zillow listing advertised a two-bedroom apartment on the edge of Five Points for $1,595 a month. (Thomas Gounley)

A landlord’s approach to marketing a two-bedroom unit on the edge of Five Points can be summed up with the line: “I believe in a non corporate style, big surprise.”