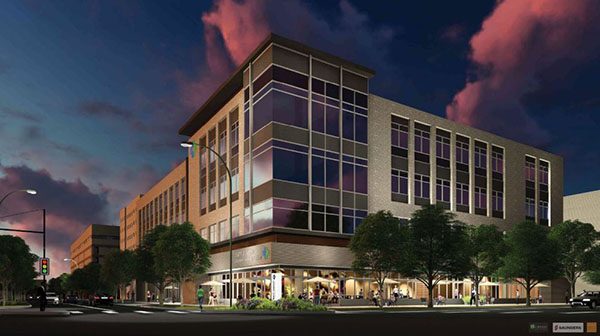 A new five-story medical office building is planned for a corner of the St. Joseph Hospital campus in Uptown.

Fidelis Healthcare Partners, a new health care real estate company launched by former CBRE and Trammell Crow Co. executives, said this week that it will develop the 100,000-square-foot structure on a 1-acre site at the northeast corner of the intersection of Park and 18th avenues and Ogden Street.

The site is undeveloped. The building’s ground floor will feature retail and restaurant space as well as physician parking. That will be topped by three levels of medical office space, and a fifth floor with retail space that opens out to a rooftop deck.

A two-level parking garage will be built on the triangular lot across Ogden Street, which also is undeveloped.

St. Joseph Hospital President Jamie Smith said in a statement that in addition to the 375-bed hospital, the campus has two medical buildings totaling about 250,000 square feet.

“However, the campus has proven to be so popular that there’s a waiting list for space, and our existing medical office buildings are 99 percent leased,” Smith said.

Dallas-based Fidelis Healthcare Partners is led by Mark Allyn and Kevin O’Neil, who previously worked in Dallas for CBRE and Trammell Crow. The company is affiliated with Houston-based Fidelis Realty Partners Ltd., a real estate development firm with over $3 billion in retail assets across the southwestern United States.

The Uptown building is Fidelis Healthcare Partners’ first project. The joint venture will own the building. It signed a 70-year ground lease with St. Joseph Hospital — part of SCL Health, a Catholic health system with 11 hospitals in three states — several weeks ago.

Jason Gaines, St. Joseph’s vice president of strategy and business development, said Fidelis was one of seven parties that submitted a final bid in response to the hospital’s request for proposals.

Beyond the basic need for more space, “We also believe delivering care in an outpatient setting is preferred by patients and can drive cost out of health care, while maintaining the highest level of quality,” he said.

Gaines said St. Joseph specifically asked for a retail component in its RFP.

O’Neil said 30 to 50 percent of physicians in medical office buildings on hospital campuses are employed by the hospital, with the remaining physicians being independent practitioners with hospital privileges.

He said St. Joseph hasn’t committed to leasing space in the building for physicians it employs, but he hopes the hospital will do so.

O’Neil said he believes the medical district is underserved in terms of restaurants, and that the ground floor and top-floor retail space could be attractive to them.

“The market will tell us what it wants to be,” he said.

Boulder Associates designed the project and Saunders Construction is the general contractor. CBRE is leasing the medical offices, while Legend Partners will market the retail space.

O’Neil said Denver is one of about a half-dozen markets where Fidelis Healthcare is focusing its efforts; the others are Phoenix and multiple markets in Texas, he said. 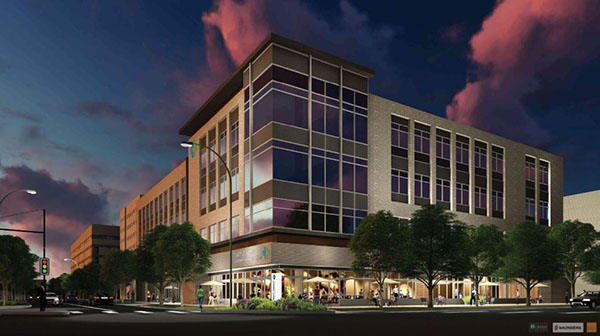 The project, the first for a new Dallas-based health care real estate firm, also will have retail space on the first and fifth floors.