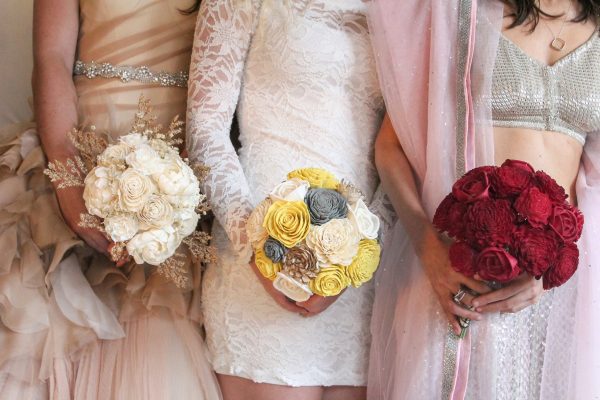 Wedding memories last a lifetime. Wedding bouquets do not.

Whitney Hixon is setting out to change that.

The Colorado native carves flowers out of wood and sells them under the Perennial Posy brand. Hixon, 28, said she’s made $13,000 in profits since launching her website in April.

The majority of Perennial Posy’s customers are brides looking for wedding bouquets, centerpieces or bridesmaid gifts.

“It’s a nice memento of their day because they’re not going to die,” Hixon said. “Brides are not interested in flowers that will die in a couple days.”

Hixon also offers her products on a more temporary basis.

“A lot of charity events have wanted to rent them,” she said.

Hixon got the idea to carve flowers after watching Utah-based Eco Flower’s 2016 appearance on the television show “Shark Tank.” The business made arrangements out of wood and paper flowers, and Hixon loved the idea so much that she placed an order.

Unfortunately, the company shut down in February, she said.

“I had placed an order and months went by and I could never get a hold of anyone,” Hixon said. “I started to teach myself how to make them.”

Hixon purchases thin rolls of sola wood from Thailand, then carves out petals and ties them together. Each flower takes two to 10 minutes to create, she said. She uses acrylic paint on each petal, and uses an electronic cutting machine to speed up the petal-making process. 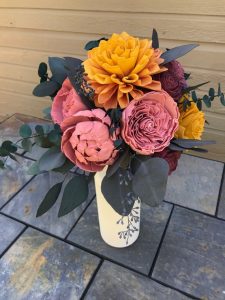 She knows of one other Colorado business that also makes wood flowers, in Parachute.

Hixon grew up in Parker before attending the University of Colorado Boulder. She now works in city planning in Broomfield.

“My daytime job is very analytic, so this allows me to get creative and use a different part of my brain,” she said. “It’s just really nice to get outside of the box and be challenged that way.”

Hixon sells her flower arrangements only online, although she does meet with customers in-person to show her wares. In the future, Hixon wants to focus on Perennial Posy full time, and open a brick-and-mortar shop. She’s also interested in getting into other aspects of the wedding business by renting out tables, chairs and other event equipment.

Whitney Hixon said she’s made $13,000 in profits since launching Perennial Posy in April, selling bouquets made from wooden flowers.