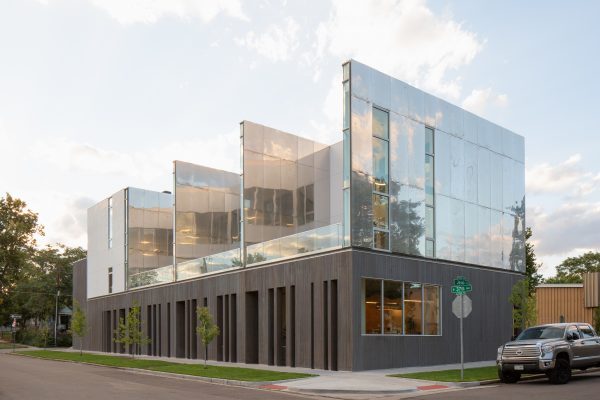 Atria, a development of four townhomes in LoHi, has hit the market. (JC Buck)

Four new townhomes in LoHi are stretching the boundaries of multifamily design in Denver.

Atria, a set of townhomes on Jason Street, boasts two-story triangular indoor solariums and Japanese-style sunken kitchens. One unit sold for $1.2 million, according to property records.

Brooks Ferring of Gateway Development is developing the townhomes. Jorgen Jensen with Slate Real Estate is listing the properties. 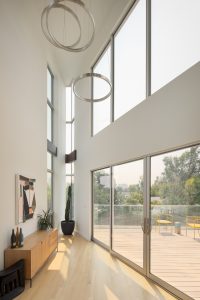 “This is my third project with these guys,” Ferring said. “They’re pretty unique and nontraditional. We were trying to do something a little different.”

But why the narrow, triangular structure rising two stories on three of the townhomes?

“That’s more a function of the shape of the deck,” said Chad Mitchell, founder of Meridian 105 Architecture. “We wanted to open up enough of the views to the skyline as possible. That’s primarily the reason.”

The group decided against the design of many Denver three-story townhomes, which feature a rooftop deck and a “doghouse” doorway to get to the rooftop. Ferring wanted to create a flow between the indoor and outdoor living spaces, and creating the indoor solarium in the shape of a triangle was the result of maximizing the outdoor deck.

“We wanted to do a good-sized deck that was off the bedroom level,” he said. “We envisioned the interior atrium function with the outdoor.”

On the first level, guests can take two steps down into the kitchen and bar, also known as a Japanese-style sunken kitchen. The architects decided to use panels for the dishwasher, refrigerator and freezer to create more uniformity with the kitchen’s cabinetry. Mitchell said he used 3-D modeling software to design and fabricate the slanted wooden ceiling above the kitchen.

“We wanted to really distinguish the footprint of the kitchen and anchor it in the middle of the space,” he said. 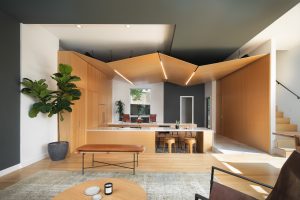 On the first level, guests can take two steps down into the kitchen and bar, also known as a Japanese-style sunken kitchen. (JC Buck)

Outdoors, Ferring and Mitchell created cedar colonnades on the street level to give residents privacy and a sense of separation from the street. They used a pine tar finish on the cedar from Scandinavia, the same hardy material used on Viking ships, Mitchell said. The colonnades are unevenly spaced out on the exterior facing the street.

“It gives it a little more natural appearance and just makes it a little bit more interesting from an urban perspective,” Mitchell said.

The white finish on the exterior of the townhomes is Vero Venetian Plaster.

“It’s smooth, almost like a sheet of glass or metal. It’s a much nicer product than stucco,” Mitchell said.

Ferring said he purchased the property on the corner of Jason Street and 37th Avenue in 2014. The neighborhood is still home to light industrial businesses; a sausage maker and pasta manufacturer operate within a few blocks of the residences.

“It was before this area of LoHi had seen a lot of development,” Ferring said. “I just loved how walkable this whole neighborhood was.”

The three remaining available units are listed between $875,000 and $1.1 million. Unit 1, which is the least expensive, features an entirely different floor plan, including a third-floor kitchen and a dumbwaiter to carry groceries and supplies up from the garage.

Atria, a development of four townhomes in LoHi, has hit the market. (JC Buck)