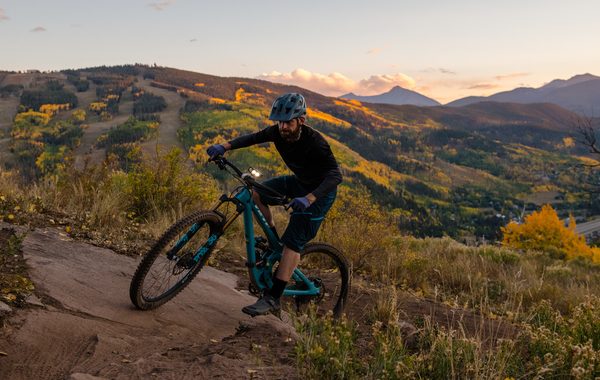 “We need enough to go out and purchase the tooling and molding, and actually to make the final product,” said Ernest Saeger, who is the business development manager. “It’ll help us be able to bring the Hydra 3 to full production and bring it on the shelves.”

Co-founders Chris Slaughter, a lighting engineer, and Jeff Mullen, a rocket scientist, met while skydiving. In 2015, the two had the initial idea for the Hydra 3 after getting fed up with clunky headlamps and handlebar lights. 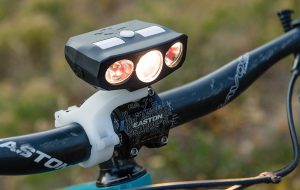 The Hydra 3 uses motion sensors to automatically shift the light beams as the bike rounds a corner. (Courtesy of Mystic Devices)

In January, the friends made a prototype off a 3-D printer in Slaughter’s guest room. The Hydra 3 mounts to a bike’s handlebars and uses motion sensors to automatically shift the light beams as the bike rounds a corner. The product has different modes for climbing and brightness levels that can adjust for longer battery time.

Saeger said the product post-Kickstarter will retail for $175, adding that mountain bikers often spend $300 on lighting.

“We wanted to set out to change that norm,” he said. “This is the only light you will ever need. It has two hours of run time on full power.”

The Hydra 3 will be sold online to begin with and Saeger said the startup hopes to expand into bike shops.

“Once you have experienced the light, it truly is a game changer,” Saeger said. “It feels like you’re riding during the day. It doesn’t hold you back.”

Saeger expects the Hydra 3 will be ready for shipment to customers by January. The product is assembled and made mostly in Denver, with a few parts coming from overseas, he said.

Saeger said the three friends — all are keeping their day jobs — plan to expand into bike commuter lights, dirt bike lights and headlamps for skiing.