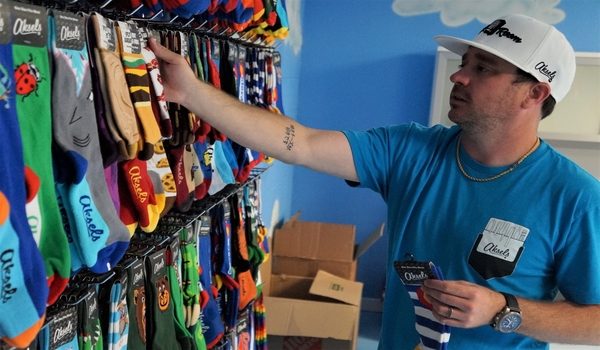 Dane Burneson wants to move beyond the Colorado flag.

Don’t get him wrong. He loves the state. He grew up in Aurora and lives with his wife Lauren in Denver. The apparel company Burneson owns, Aksels, sells more than 100 riffs on the flag — more specifically, its red “C,” encapsulating a golden disc — emblazoned on hats, socks and shirts.

The designs sell well, whether at events, brick-and-mortar stores or online. They aren’t going anywhere. But they’re limiting.

So when a reporter stopped by Aksels’ new warehouse one afternoon this summer, Burneson soon was rummaging through product in the back of a truck, looking for what had been exciting him lately.

“The Colorado thing is great,” he said. “It’s huge for business. But I see a bigger picture, like bacon-and-egg socks, and …”

Yes, food designs. One sock bacon. One sock egg. One sock cookie. One sock milk. Sold by the pair.

Is this Aksel’s next big sales trend? Maybe. What Burneson really cares about is that, compared to a state flag, it sure seems a lot more universal.

“A bacon-and-egg sock you can put in every store,” he said. “A Colorado hat, you can only really put in Colorado.

“I want Aksels to be an international brand.” 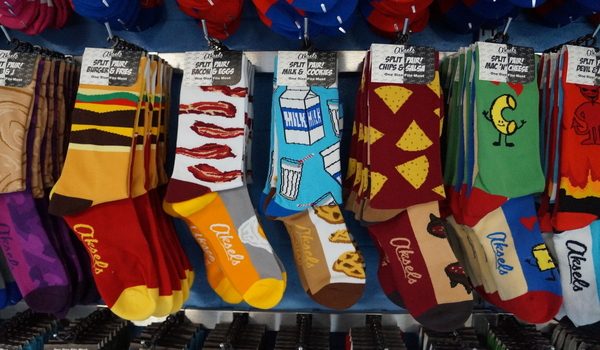 Growth of a business

Shortly after graduating from Colorado State University in 2006 with a degree in marketing, Burneson, now 35, moved to southern California.

He hoped to get a job at one of the surf brands in the area, such as Quiksilver or Volcom, but didn’t have any luck. Then he shifted his focus to retail in general, hoping to become a buyer for a major brand.

In the end, he landed in a call center for department store Nordstrom — “If you had a Nordstrom Visa, you got me when you dialed the number on the back of your card” — thinking maybe there’d be an opportunity to shift to the main office. But the phones, he soon decided, were a dead end.

Burneson, whose middle name is Aksel, said he first drew the logo for his own apparel brand while working the job. In fall 2007, he moved back to Denver, and decided to make the company his sole focus.

“Basically I took a $3,000 loan out on my car, and I was living in my sister’s basement, and took pretty much a year to get it off the ground,” Burneson said. 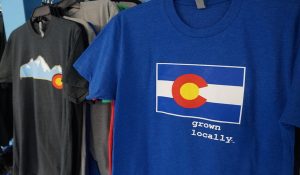 “Grown locally” was one of Aksels’ original designs. (Thomas Gounley)

He began by going door to door to local skate shops, asking them to sell product on consignment. He had a handful of designs, including one featuring the Colorado flag and the words “Grown Locally.” Burneson said he created it because he “was sick of seeing those ‘native’ bumper stickers.”

“I was thinking, how else can you say native? And boom, grown locally,” he said. “Now with all the weed stuff, people have their own connotation.”

It was a fledgling business, and Burneson ended up needing outside income. In the summer of 2008, he got a job cold-calling for cybersecurity firm Accuvant (now Optiv), trying to drum up meetings for salespeople.

This job wasn’t a dead end. Burneson became a salesperson himself, eventually making “healthy six figures.” He rented office space downtown, focusing on Aksels in the evenings, which meant “working basically 9 a.m. to 2 a.m., God, the whole time I was there.” He left the job in May 2013.

In May 2014, a regional buyer for Bed Bath & Beyond contacted Burneson.

He was wary — “Bed Bath’s not cool” — but ultimately decided, “If you let me design the fixture, let me make it look cool and don’t screw with the pricing, let’s do it.” He started out in a handful of stores. 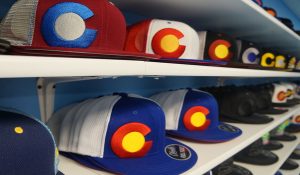 Four years later, Aksels is in “several hundred” Bed Bath & Beyonds, and Burneson considers aligning with the retailer “one of the best decisions I made for the business.”

Aksels hats typically retail for $25 to $30. Shirts start around $24, and socks are priced at $12.99. In addition to brick-and-mortar retailers like Bed Bath & Beyond and Dick’s Sporting Goods, Aksels sells through its own website and others such as Amazon, and at weekend festivals and other events.

By 2017, one of the country’s largest brick-and-mortar retailers after Walmart came calling (Burneson said he’s not supposed to use the retailer’s name without advance permission).

It was a more complicated request. The retailer wanted to sell Aksels in some of its stores, but didn’t want to charge more than $19.99 for a shirt or $9.99 for socks. Wary of diluting the Aksels name, Burneson chose to create a separate brand, which he asked not be named, for the lower-priced products.

The new brand’s products have different designs than Aksels, but the cost of production is similar, and “At the end of the day, it’s more or less me taking a hit on the margins,” Burneson said. Aksels is now in about 30 of the retailer’s stores, in Colorado and New York.

After that, gas stations and supermarkets came calling. So earlier this year, Burneson launched a third brand to sell similar products at an even lower price.

“I realized instead of saying no to people, it was a lot easier to spin up a new brand,” Burneson said. “If anybody’s going to knock me off, it’s going to be me.”

Growing in Denver, with an eye elsewhere

It’s been a busy year for Aksels.

In January, the company purchased a warehouse in Denver near Interstate 25 and Alameda Avenue, paying $1.97 million for 1339 W. Cedar Ave., according to county records. The 17,000-square-foot building replaces a smaller industrial property the company had been using in Globeville. 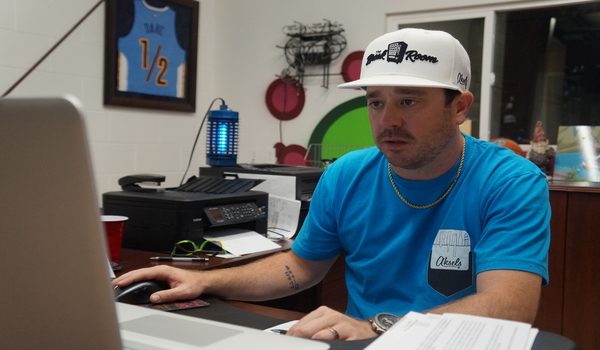 Burneson works in his office inside the company’s new warehouse. (Thomas Gounley)

In the spring, Aksels opened a store in Denver’s Cherry Creek Mall. Its features include a basketball hoop; customers can shoot from lines corresponding to a 10, 20 and 30 percent off, getting the discount if they make it.

This summer, Burneson has worked to convert a portion of the company’s warehouse to a secondary store, which users enter by pushing a vending machine next to a television playing the “MacGyver” series. Starting this week, it’s open from noon to 6 p.m., Wednesday through Saturday.

While there are plenty of places to buy Colorado pride apparel today, Burneson maintains it was a lot different when he launched Aksels. 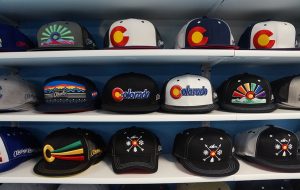 Burneson estimates that 75 percent of his products feature the “C” seen on the Colorado flag. (Thomas Gounley)

“We were the first ones that created a line around it,” he said. “A whole fashion line … It was a haymaker for us for years.”

Today, Aksels and the related brands do between $5 million and $10 million in annual sales, Burneson said. He estimated that 75 percent of his product, which is manufactured overseas, has a Colorado “C” on it.

The motif is obviously less popular outside the Centennial State. At first, Burneson said, as retailers broadened Aksels range, he imitated his original focus on a state symbol; it turns out Maryland and California also have state pride. And now, with universal designs for mac-and-cheese socks, and chips-and-salsa socks, Aksels is attempting novelty without borders.

A retail buyer’s request for flying pig socks a couple years ago probably kicked it off, Burneson said. It made him think about animal designs. Then food designs.

There’s competition in that realm too, but Burneson thinks his products stand out.

“You Google hot dog socks, you’ll find a ton of them,” he said. “But they’re all thin, not comfortable.”

Regardless, it’s something new for Burneson to focus on.

“I want to feel like I’m always out there getting after it,” he said.

Denver-based Aksels has built a multimillion-dollar business riffing on the Centennial state’s flag, but founder Dane Burneson is thinking beyond borders.