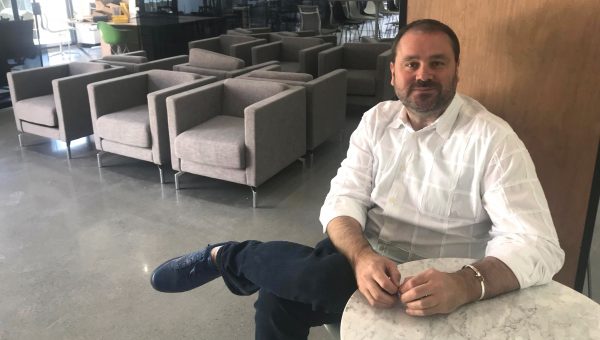 Joshua Wilson is the founder of Neu.works in Cherry Creek. (Kate Tracy)

“Every single one of these people is 40s, 50s, all multimillionaires,” said Wilson, 45, of the 11 clients he already has signed up. The space opens this week.

Wilson said he’s catering to the Cherry Creek demographic of seasoned professionals at his 13,650-square-foot coworking space at 201 Columbine St. The space features clean, Scandinavian design with floor-to-ceiling sliding glass doors for each private office and a wraparound outdoor balcony.

“I wanted it to feel like an art gallery,” Wilson said. “This would not work in RiNo.”

Wilson, originally from Texas, came to Denver in 2009 and was the previous president of United NRG Group and Coldwell Banker’s franchise branch in Dublin, Ireland. After selling NRG, he wanted his next business to be shared offices that catered toward mid-career professionals instead of young startups.

Wilson has poured more than $2.3 million into the buildout, he said, adding that he pays $50,000 per month in rent to Seattle-based landlord Unico Properties. He plans to rotate original art throughout the space and turn Neu.works into a members-only lounge at night, featuring Scandinavian cocktails with Neu.works’ full liquor license.

And he’s not stopping in Cherry Creek. Wilson’s goal is 40 more locations in five years, including international cities in Europe and the Caribbean. But first, Wilson is looking to expand closer to home this year, with locations planned in Santa Fe, Vail and Aspen.

“Each one will have a little twist,” Wilson said. “I’m going to appeal to those upscale areas.”

Other nearby coworking locations include Boardroom Workplaces, which recently announced its new office at 501 S. Cherry St. Plus, a women-only coworking space from St. Louis is shopping around for Cherry Creek space.

Joshua Wilson is the founder of Neu.works in Cherry Creek. (Kate Tracy)

‘Every single one of these people is 40s, 50s, all multimillionaires,' founder Joshua Wilson said of the 11 clients already signed up.