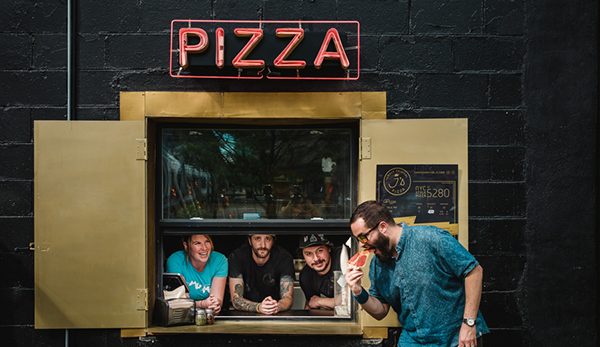 After nearly two years of preparation, a year of permitting and a four-month soft launch, the man responsible for bringing New York bagels to Denver is kicking his next act – pizza – into full gear.

“For both pizza and bagels, it’s all about the crust,” said Joshua Pollack, owner of Rosenberg’s Bagels, and founder of the Bridge and Tunnel restaurant group. “It was a logical business choice.”

Pollack brought the bagels he grew up with on the East Coast to Denver in summer 2014, when he opened Rosenberg’s Bagels in Five Points. Four years later, Pollack’s Bridge and Tunnel restaurant group includes two Rosenberg’s Bagels, a deli, over 80 employees and now a hole-in-the-wall pizza joint.

“No restaurant has really nailed the by-the-slice pizza I grew up with,” Pollack said. “There’s also not a lot of late-night offerings around Denver.”

Original J’s has been open since April, serving customers on the weekends from a takeout window behind dive bar Club 715.

For Pollack, being open full time couldn’t have come soon enough; he said he waited over a year to get the necessary permits, and that city officials were less than helpful in the meantime.

“We didn’t fit into any particular box,” Pollack said. “They weren’t happy and put up a lot of roadblocks to prevent this from happening.”

What exactly makes a slice of pizza New York-style? According to Pollack, the criteria is two-fold: size and texture. Every slice Original J’s sells comes from a pizza no smaller than 20 inches across. But again, the crust is key.

“The pizza needs to fold without cracking all the way through,” Pollack said. “And it can’t flop over at the tip, even with all the cheese, sauce and toppings.” 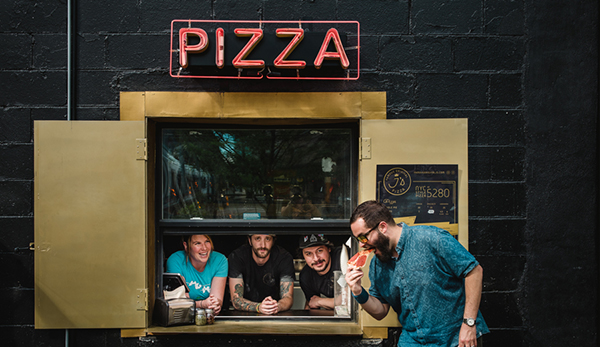