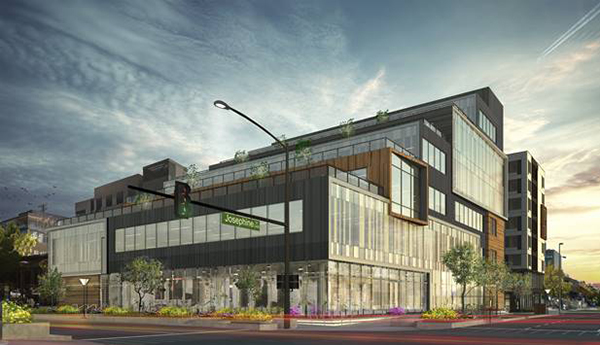 A rendering of 260 North, a mixed-use building being constructed in Cherry Creek. Photo courtesy of Elevation Development Group.

The top four office floors each will have a private deck, making the building resemble a staircase.

Lario President Ryan O’Shaughnessy said the company is still in the middle of its lease for the Larimer location.

“We really liked the layout, getting to have our own floor,” O’Shaughnessy said. “The patio was a big selling point.”

He said the firm plans to sublease its office on Larimer Street.

“Our usage of the outdoor space will go up by leaps and bounds (at the new building),” he said.

“The tradition started in the 1980s, when a lot of the buildings were built in the upper downtown,” he said. “They were built to accommodate the oil-and-gas boom in Denver.”

O’Shaughnessy, however, said that while meeting colleagues from other firms for a working lunch is still a regular occurrence, the way people communicate now has mitigated the need to be within walking distance. And Cherry Creek isn’t that far, he said.

“It wasn’t as if we were moving to the Tech Center,” O’Shaughnessy said. “It’s still a five-minute drive if you have a meeting.”

O’Shaughnessy also said the new office location will give many employees an easier commute, and that Cherry Creek feels safer than downtown.

Elevation’s Farber said leases also have been signed for 260 North’s third and fifth floors, although he declined to identify tenants.

The new structure is being built on the site of a former rug store. Sarkisian Properties, the real estate company headed up by the owners of the former shop, brought on Elevation as its development partner and has equity in the new building.

A rendering of 260 North, a mixed-use building being constructed in Cherry Creek. Photo courtesy of Elevation Development Group.

Lario Oil Co. will move into 260 N. Josephine St., which includes a special amenity: Each floor of offices will have its own outside deck.