The operator of the Park Hill Golf Course doesn’t want to relinquish control of the 155-acre, 18-hole golf course while it litigates a chance to buy the entire parcel.

Dallas-based Arcis Golf, which manages the 90-year-old course, confirmed to BusinessDen this week that it renewed its lease for five more years with landowner Clayton Foundation.

“We don’t want a time period for the property to be out of our hands while this (litigation) goes forward,” said Scott Siddons, general counsel at Arcis.

Since the end of April, Arcis and Clayton been locked in a lawsuit over a lease stipulation that gives Arcis a “right of first refusal” to buy the land after a “bona fide” offer. 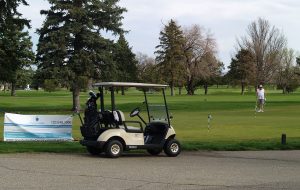 The Clayton Foundation, which has hired Denver law firm Brownstein Hyatt Farber Schreck, claims that the right of first refusal does not apply because the deal was never consummated with a City Council and Mayor’s signature, and is therefore not a “bona fide” offer.

The Clayton Foundation runs an early education nonprofit, relying on revenue from Arcis to help cover its budget.

Arcis pays the Clayton Foundation rent of $700,000 per year, and that rate remains the same when the new lease term starts in January 2019.

Siddons said that the golf business at Park Hill has improved from a few years ago, when the course lost money.

“City Park Golf Course closed for the season has increased demand at our golf course. It’s good for business,” he said, adding that Park Hill is making a profit now.

Siddons also said Arcis renewed its lease knowing that the City of Denver wants to begin construction of is a planned storm water system upgrade on part of the course.

“We will have to deal with the city’s plans,” Siddons said, adding that construction likely will cause the course to be closed.

“We hope to negotiate with the city to get compensated … which would require a reimbursement of rent,” Siddons said.

The operator of the Park Hill Golf Course doesn’t want to relinquish control of the 155-acre, 18-hole golf course while it litigates a chance to buy the entire parcel.