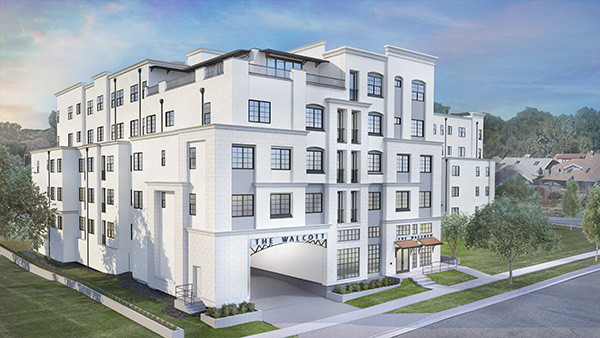 A rendering of the apartment complex slated to be built at the site. ARA Newmark

A Florida-based developer new to the Denver market has paid $5 million for land near the intersection of Speer and Federal boulevards where it plans to build an apartment complex.

Stevenson said the LLC purchased the parcels last year for $3.5 million, and then began the process of securing entitlements. That included drafting and submitting to the city a site development plan that calls for the construction of a 122-unit apartment complex.

The apartment complex would be five stories, with 70 studios, 45 one-bedroom units and five two-bedroom units, according to the plan, which still needs to receive final approval from the city. The plan was drawn up by Centennial-based Godden | Sudik Architects.

The development would have 131 parking spaces.

As a result of the seller going through the entitlement process, the buyer “can break ground in 30 days,” Stevenson said, although he added that wasn’t necessarily the buyer’s timeline.

The three parcels that were sold add up 0.88 acres, making the deal worth $130 a square foot. The parcels form an “L” around an existing apartment building at the corner of Federal Boulevard and 29th Avenue.

The parcels were scrapped. Each parcel previously had a single-family home on it, but Stevenson said they were in poor condition and had not been occupied in years.

Waypoint Residential acquires and develops multifamily, student housing and senior housing properties, with the bulk of its holdings in the southeast and Texas, according to the company’s website.

Stevenson said the apartment complex along Federal will be Waypoint’s first project in Denver.

Waypoint financed the deal with a loan from Dallas-based Texas Capital Bank, according to records.

About a block west of the site, Denver-based Ecospace has purchased land for a townhome development.

A rendering of the apartment complex slated to be built at the site. ARA Newmark

A Florida company bought a Highlands plot that comes scraped and with a plan of development for a five-story apartment complex.