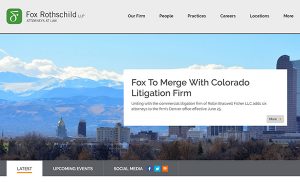 A Philadelphia-based law firm is adding staff to its Denver office through an acquisition.

Fox Rothschild said Thursday that it is acquiring Greenwood Village-based Rollin Braswell Fisher, also known as RBF Law, and that six of the latter’s attorneys will start work Monday.

The “Our Team” section of RBF’s website lists 12 attorneys.

Fox Rothschild Chair Mark Silow said the decision regarding how many attorneys to hire was based on the amount of work that was coming over to Fox Rothschild through the acquisition.

“It was a matter of rightsizing the available lawyers to work on the RBF cases,” he said.

Silow also said RBF had some contract lawyers that were hired to work on a particular case.

Fox Rothschild has about 820 attorneys spread across its 21 offices in the United States, Silow said. The firm’s Denver office opened in 2012. The RBF acquisition will bring it to about 40 attorneys.

Fox Rothschild has expanded locally through an acquisition before. In 2013, the firm bought Lottner Rubin Fishman Saul, which added 16 attorneys to its staff.

Silow said Fox Rothschild was looking to expand in Denver because, “It’s been a great market for us.”

“The core of our practice in Denver has been real estate, and real estate has been booming in the Rocky Mountains,” he said.

Silow said the RBF acquisition will be “a further step in diversifying and expanding” the office’s practice areas.

RBF’s website said the firm represents companies and individuals in both state and federal courts, and has been “at the center of some of the most complex and well-publicized legal battles coming out of the financial crisis.” Silow said the bulk of that work involved representing financial institutions in cases involving mortgage-backed securities and mortgage-backed security pools.

At Fox Rothschild, Rollin and Braswell will head a practice group devoted to capital markets and asset-backed securities litigation, with a presence in both Denver and New York.

“We are seeking a national platform for our practice and clients, and Fox’s geographic reach provides that for us,” Braswell said in a statement.

Silow said the acquisition took about six months to complete.

A Philadelphia-based law firm is adding staff to its Denver…