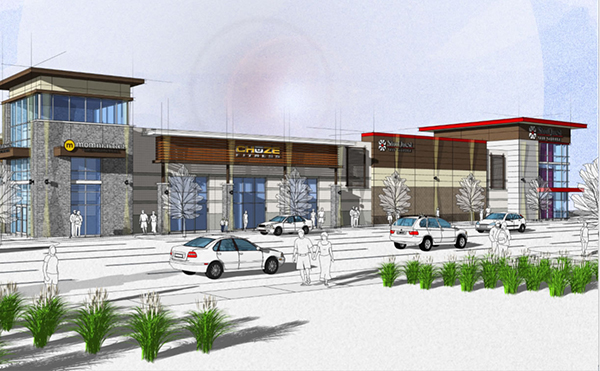 A rendering of the converted Kmart in Englewood. Courtesy of The William Warren Group

Santa Monica-based The William Warren Group held a community meeting this month to discuss its vision for the 140,000-square-foot building at 200 W. Belleview Ave. Kmart closed that store in November.

The company wants to convert just under half the structure, about 60,000 square feet, into a StorQuest Self Storage facility with a drive-in loading area. William Warren operates the StorQuest brand.

Chuze Fitness, which operates gyms in Colorado, Arizona and California, has signed on to occupy about 40,000 square feet on the southern end of the building. The remaining 40,000 square feet is being marketed to small retailers and restaurants.

The bulk of the self-storage facility would be toward the rear of the structure set back from the front of what used to be the Kmart.

Jon Suddarth, vice president of real estate for William Warren, said the building is about 230 feet deep, and most retailers don’t want stores that stretch that far back.

Suddarth said Capital Pacific has a long-term land lease on the property and contacted William Warren shortly after Kmart decided to leave. William Warren is acting as the master developer for the building, with the exception of the Chuze space.

Converting big-box retail stores to self-storage has been implemented elsewhere around the country. Suddarth said William Warren has repurposed existing buildings into StorQuest facilities before, but hasn’t converted a big-box store in Colorado.

Suddarth said the self-storage component is the “economic engine” that would allow for the broader conversion of the building.

The project still needs approvals from Englewood city leaders, who would need to sign off on a planned-unit development site plan, as well as amend zoning to allow for self-storage.

Suddarth said construction of the StorQuest side of the building isn’t expected to start until next year. Legend Partners has been tapped to lease out the remaining retail and restaurant space at the site.

A rendering of the converted Kmart in Englewood. Courtesy of The William Warren Group