Waqar “Vic” Ahmed, who started Innovation Pavilion in 2011, said in a prepared statement and a YouTube video Thursday that he is stepping down as CEO.

Gutierrez also has sued Ahmed and Innovation Pavilion for damages related to alleged repeated harrassment on airplanes and in hotels.

Ahmed, who declined to comment beyond his statement, claims he had consensual relationships with coworkers and that charges that imply coercion and harassment are false.

“Mrs. Gutierrez told me many times she loved me. At that time, I thought I did also,” Ahmed wrote in his statement, adding that his marriage of 20 years fell apart “some years ago.”

He claims he has corroborating evidence, including text messages.

His statement did not address Regalado’s allegations. However he said the relationships were ill-advised.

“This (consensual relationships with coworkers), I know now in no circumstances can be considered appropriate. Even though it does not cross any legal boundaries, I regret it.”

Regalado, who was just out of college when she claims Ahmed cornered her in a DTC hotel bar and tried to kiss her and grab her breasts, said Ahmed’s statement is an attempt to cover his tracks.

“Vic’s statement is not only disgusting, it is highly offensive,” Regalado said. “There was in no way anything about anything that happened at the Inverness hotel that was consensual.”

Ahmed ended his statement by writing, “This Phoenix will rise from the ashes.” 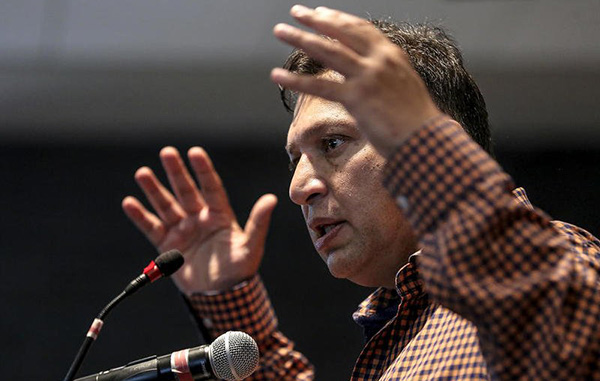 Waqar “Vic” Ahmed, who started Innovation Pavilion in 2011, said in a prepared statement and a YouTube video Thursday that he is stepping down as CEO.