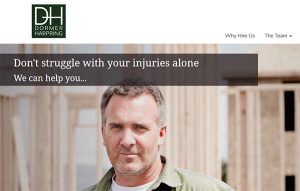 A Denver lawyer is suing two male partners, alleging they forced her from the firm after she confronted one about verbally and emotionally abusing her and two female assistants.

According to the lawsuit, the three young attorneys – who graduated law school between 2011 and 2014 – formed Dormer, Harpring & Gray in September 2016. Each had an equal stake in the firm.

The lawsuit alleges numerous instances of “verbal abuse” and “reproachful comments” made by Dormer and directed to Gray and the firm’s two legal assistants starting in spring 2017.

Much of the language Dormer allegedly used is not quoted verbatim, although the lawsuit says that in March 2018 he told a legal assistant, referring to a case involving a client with a severe brain injury, to “figure it out yourself, you aren’t brain-dead like our client.”

Confronted about the matter by Gray, Dormer said it was the assistant’s “fault for being an idiot that doesn’t know how to figure things out on her own,” the lawsuit claims.

Robert Marsh, a lawyer with S&D Law representing the defendants, said in an email statement that the case is a business disagreement and that he denies Ms. Gray’s claims.

Dormer and Harpring have yet to file a response to the suit, and did not respond to a request for comment.

Another time, in early 2018, Dormer “yelled” for Gray to “shut the f*** up” during an all-firm meeting, around the same time he began telling women in the office “to limit their responses to his questions to a single sentence” the lawsuit says.

The first example of alleged abuse in the lawsuit dates to March 2017. That month, according to the suit, Dormer made unspecified “disparaging remarks” toward Gray regarding her decision to go on vacation shortly after the firm obtained a $1.77 million verdict in a slip-and-fall case involving grocery store King Soopers.

In October, the lawsuit claims, Dormer said Gray was not “partner-worthy” and accused her of embezzling money when non-firm purchases were made on her firm credit card.

According to the lawsuit, Gray said several of the purchases had been made accidentally, and Gray reimbursed the firm for them. She said one $4,000 charge at a Home Depot was unauthorized and likely related to the May 2017 theft of her cell phone, which had the credit card info stored on it.

Dormer allegedly responded that he considered Gray, her father and her boyfriend to be a suspect in the $4,000 charge. When Gray began to cry, Dormer “suggested plaintiff’s father drank too much and was irresponsible,” the lawsuit says.

In following months, Dormer stated multiple times that if Gray “messed up” again, it would be “nails in the coffin” regarding her involvement with the firm, the lawsuit says.

On May 1, according to the suit, Dormer and Harpring asked Gray to resign immediately with a $36,000 severance.

According to the lawsuit, Dormer said it was because he “didn’t think [they] made good partners together, that [she] doesn’t fit in with what he envisioned for his smaller firm, and that [she] doesn’t follow his rules of how he likes documents to be titled per his filing convention.”

When Gray refused to resign, Dormer and Harpring told her they had decided days earlier to change her salary from $4,500 to $1 per month, according to the lawsuit. They continued to pressure her to resign, dropping the severance amount first to $18,000 and then to $0, the lawsuit says.

The lawsuit also alleges Dormer reached out to Million Dollar Advocates Forum, a group of attorneys who membership is limited to those who have won million-dollar settlements, in an attempt to boot her from the organization.

Gray is represented in the lawsuit by Tyrone Glover and Jeffrey Pagliuca of Denver’s Haddon, Morgan and Foreman.

The law firm now is doing business as Dormer Harpring. Glover said his client still considers herself part of the firm, but is willing to part ways if the process outlined in its operating agreement is followed.

That agreement specifies that the departing member is, among other things, entitled to their share of company revenue prior to resignation and overall cash on hand, according to the lawsuit. Gray alleges she hasn’t received her commissions from the first quarter and wants access to the firm’s books.

She claims one colleague called an assistant "an idiot that doesn’t know how to figure things out on her own," among more colorful exclamations.