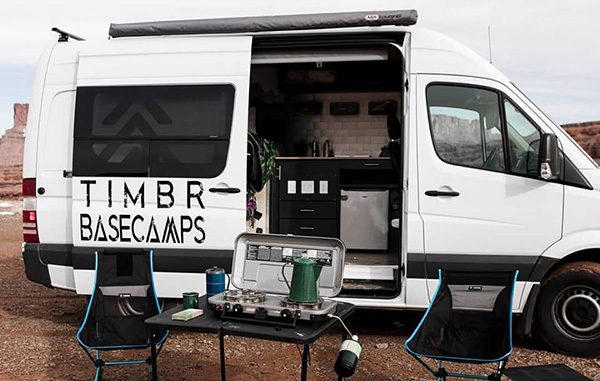 Timbr Basecamps has rented out vans in Golden since February 2017. (Timbr)

Devon Svejcar has been bitten by the Colorado campervan bug.

He started Timbr Basecamps in February 2017 after he and his wife toured parts of Australia in a van.

“I kept trying to figure out how to get my own van, and figuring out how to afford it,” Svejcar said.

He bought three vans last year and designed the buildouts for each one. But after a summer of taking them to festivals and being asked if Timbr built vans to sell, Svejcar decided to start making custom builds in November. Now the business is building its 11th van for customers.

It takes between one and four months to build out a van, depending on what a customer wants.

Timbr is located in a 2,000-square-foot shop and office in Golden at 871 Brickyard Circle. It parks rentals across the street.

“It’s a great takeoff point for adventures,” Svejcar said. “Most people who travel here are going west … All the highways come together here.”

The company recently bought a fourth van, as well as two pull-behind trailers with rooftop tents, from Golden’s Elevated Tents. 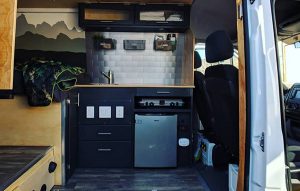 The kitchen area inside a campervan. (Timbr)

“I was pleasantly surprised that our fall was super busy. Right now, our summer is booking out like crazy. The demand is pretty high from May through the end of October.”

The Golden native graduated from Metropolitan State University of Denver with a degree in behavioral sciences. He worked as an outdoor guide and in construction during the off-seasons.

“I actually sold my car so that I could have a little bit of startup money,” Svejcar said. “I just drive whatever of my rental vans is available … We had a small investment from a couple investors who just really liked the idea.”

Timbr Basecamps has rented out vans in Golden since February 2017. (Timbr)

Timbr Basecamps is building its 11th vehicle for customers after showing them off at summer festivals.