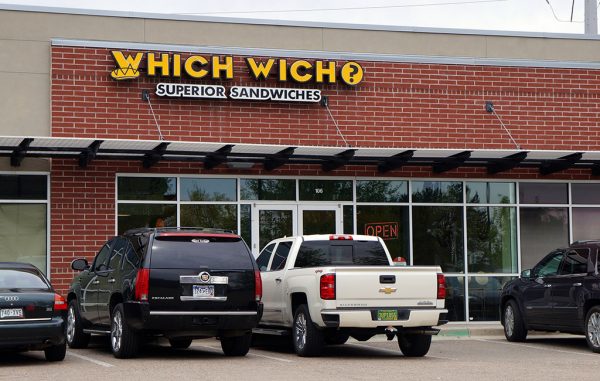 A Which Wich location at 3970 Buchtel Blvd. South in Denver. (Thomas Gounley)

A local franchisee for the Which Wich Superior Sandwiches chain has filed for Chapter 11 bankruptcy, a move the franchisee’s attorney attributed to increased competition for quick-service sandwiches.

Highlands Ranch-based Colorado Wich LLC said in an April 24 filing that it owes between $1 million and $10 million to between 100 and 199 creditors. The company lists assets of $500,000 to $1 million.

Colorado Wich is led by Jeffrey A. Gordan. Lawyers Ken Buechler and Michael J. Guyerson of Denver’s Buechler & Garber are representing the company in the bankruptcy.

Colorado Wich opened its first Which Wich location in Lone Tree in 2007. Buechler said the company operates eight shops in Denver and surrounding suburbs. A ninth location was closed within the last year.

Colorado Wich isn’t the only Which Wich franchisee in the state, Buechler said. The chain’s website shows more than 15 Colorado locations.

Buechler said Colorado Wich “got caught in a cash crunch” as more sandwich shops entered the Denver market, drawing from its customer base. Its eight locations remain open, but he said the company is reviewing store financial results as part of the bankruptcy proceedings.

“If a location is not profitable, we will probably have to consider what to do with that, including possibly closing,” Buechler said.

Colorado Wich’s bankruptcy filings state the company owes $1.9 million to its 20 largest creditors. The creditor owed the most is Accel Capital Inc. of New York, with two claims totaling $572,000.

Colorado Wich also owes $198,000 to food products supplier Sysco, $84,000 to the IRS for payroll taxes and $25,000 to the owner of Colorado Mills mall, where the company has a location, according to the filings.

Dallas-based Which Wich opened its first location in 2003. The chain has more than 430 shops in 40 states and 11 countries, according to its website.

Colorado Wich LLC was named “Franchisee of the Year” by the chain in early 2013.

Which Wich isn’t the only sandwich shop that is struggling. Subway plans to close about 500 of its 26,000 U.S. locations this year, after closing 800 in 2017, according to the Washington Post.

A Which Wich location at 3970 Buchtel Blvd. South in Denver. (Thomas Gounley)

The franchisee’s attorney attributed the reorganization move to increased competition for quick-service sandwiches.