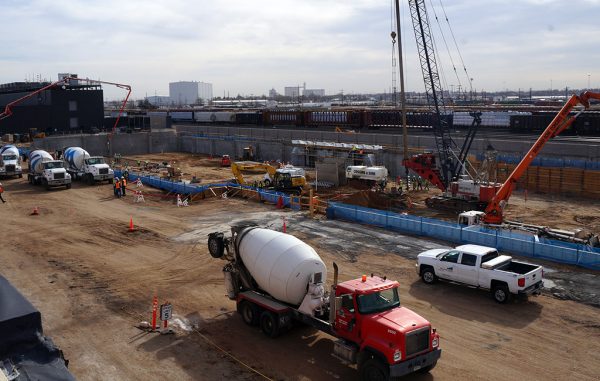 Crews work at the site of the North Wynkoop development in RiNo. (Thomas Gounley)

Denver real estate firm Westfield is about to be in firm control of the view from its office.

The company moves on Monday to 4221 Brighton Blvd., directly across from the 14-acre site that it’s turning into North Wynkoop, a mixed-use development anchored by a concert venue.

The firm is leaving 7,000 square feet on the 18th floor of LoDo’s 1800 Larimer St., which Westfield built. Development associate Andrew Katz said the company has operated there since 2009.

“North Wynkoop is going to be a potentially seven- to 10-year project to fully build out,” Katz said of the office move. “It shows a commitment to the project.”

The new office is in a former manufacturing facility of Denver-based Amen Packaging. Westfield bought the building and several others on the 3-acre site for $5.3 million in January 2016, according to land records. The company’s renovations have included the addition of a mezzanine level.

The North Wynkoop development will span the east side of Brighton Boulevard between 40th and 43rd streets, anchoring the north end of RiNo just south of the Denver Coliseum.

“It’s like Platte Street, if one owner controlled the whole street,” said Matt Davidson, one of the Newmark Knight Frank brokers leasing the development’s office space.

Westfield acquired the bulk of the land in 2014, paying more than $23 million for it, according to county records.

At the time, the properties were home to about 350,000 square feet of industrial buildings, Katz said. Westfield demolished all but 100,000 square feet, leaving behind a large warehouse along Brighton Boulevard, which currently blocks the view of the rest of the project. 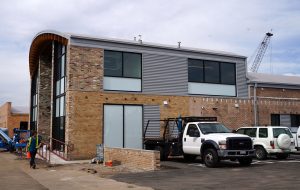 Westfield is moving its office into a former manufacturing facility. (Thomas Gounley)

The first phase of the project is expected to be complete by fall 2019. That phase calls for the South and North Market Halls to be converted into retail and office space, and for the construction of the concert venue and an additional three-story mixed-use building.

The concert venue, The Mission Ballroom, is to be built on the northeast portion of the lot, separated from Brighton Boulevard by the North Market Hall.

The 60,000-square-foot facility will be operated by concert promoter AEG Presents, which operates the Denver’s Bluebird Theater and Ogden Theatre and books the majority of shows at Red Rocks.

South of the concert venue, separated from Brighton by the South Market Hall, will be the newly constructed 90,000-square-foot office and retail building. A level of underground parking with 234 spots is being built beneath both that building and the concert venue, Katz said.

The first phase of development won’t touch seven additional acres south of 41st Street. Current plans call for the construction of up to another 1 million square feet of office space and 250 market-rate residential units there, in addition to retail space and a parking facility.

Future plans also call for a hotel to be built atop the South Market Hall, and for the North Market Hall to be topped with residential units.

The Portland office of Works Progress Architecture designed the project. M.A. Mortensen is the general contractor. 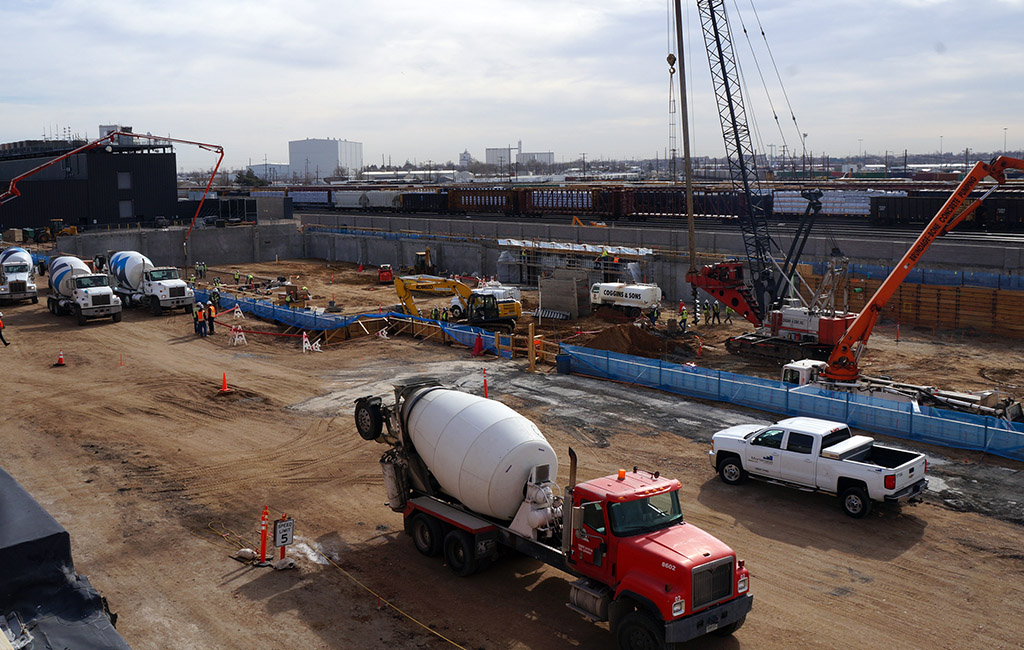 Crews work at the site of the North Wynkoop development in RiNo. (Thomas Gounley)

The Denver real estate firm is about to be in firm control of the view from its office.