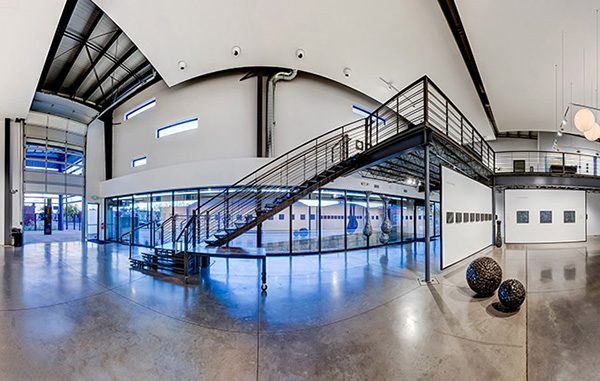 A Scottish artist is bringing abstract art to a concrete-and-brick warehouse in the Sante Fe Art District.

“When I moved here originally from Scotland, I just loved the transformation of spaces in general and fixing things up, creating something that’s new and your own,” Burnett said. “It’s partly that, and partly an opportunity to give the artists that we currently represent a space to show year-round.”

The Space Gallery has 60 artists, but only room to rotate through about 20 artists exhibiting in its current 8,000-square-foot space.

“We just want to be able to keep them in the spotlight all the time,” Burnett said. “If they’re not showing in our current exhibit, it’s just nice to be able to have a place where we can represent their work.”

Burnett purchased the Cherokee Street property for $1 million in February, with a $999,000 SBA loan. He’s adding a rooftop deck.

“We wanted to expose all the beautiful original character of the building,” he said. “We’re not doing a whole lot to it, just getting back to the meat of the building.”

Burnett, 42, grew up in Edinburgh, Scotland, and studied painting and drawing at the Edinburgh College of Art. He came to Colorado for skiing in 1999, then met his wife and moved in 2001, the same year he opened his first gallery at 2026 Larimer St. in LoDo.

“When I opened the gallery, it was really a place to show my own work and a studio,” Burnett said. “Over time, people would come in and asked to show their work. It grew from there.”

Burnett collects half the sale price of art sold at the Space Gallery. The gallery also functions as an event space for weddings, fundraisers and other gatherings. Burnett did not disclose revenue from 2017, but said the business is profitable. The Space Gallery employs two people currently, but he said he plans to hire more once the new gallery opens.

A Scottish artist is adding more exhibit space with the purchase of a concrete-and-brick warehouse on South Cherokee Street.