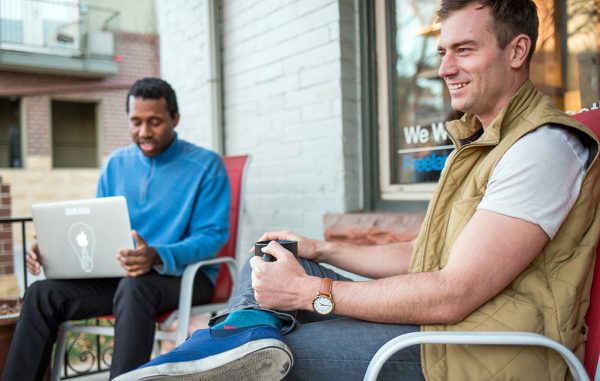 The sharing economy wasn’t always so good to Craig Baute.

Now the 32-year-old Denverite brings in more than $200,000 per year running a coworking chain with two local locations and renting out two apartments on Airbnb.

But seven years ago, he was working at Chili’s and sleeping on the floor of his first Creative Density coworking location in Uptown. After finishing his 2 a.m. shifts at Chili’s, he’d roll out his sleeping bag in the conference room or under a desk.

To keep his new business afloat, Baute found an Uptown studio apartment to rent out on Airbnb on the weekends he was working at Chili’s. And he found office tenants to move into the Creative Density offices.

If Baute felt a little homeless early on, it didn’t phase him then – and certainly doesn’t now.

“Strangers were sleeping in my bed and I was sleeping in a conference room,” he said. “You get comfortable with it, and then start seeing opportunities in everything.”

Fast forward seven years, and the Denver resident has turned into a professional share-er.

He pays an $80 yearly subscription for the Denver Tool Library, where he rents tools to fix up properties without having to buy or store his own drills or chainsaws.

This year he started renting out his car at the airport using Hassle-Free Car and opting to transport himself from his Union Station apartment via B-Cycle, Uber or Car2Go.

He even met his wife, Taylor Craver, through coworking. 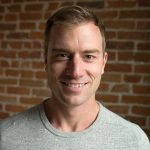 The couple met when Craver became a tenant at Creative Density and got married in September.

“He would Airbnb his apartment out and come stay at my place on weekends,” she said. Eventually, the couple started sharing the Airbnb earnings from those weekends.

“It’s just a part of who he is,” Craver said. “When I married him, I knew what I was getting into.”

Baute may have picked up the sharing gene from his father. He grew up in the small town of St. Joseph, Michigan. Baute’s father rallied the town to take care of its own snow shoveling when the residents cut it from the budget, and he remembers staying in hostels instead of hotels during family vacations in Santa Monica.

Baute earned his undergrad and graduate degrees from Grand Valley State University and worked in market research. His first experience with coworking was as a tenant of a Michigan furniture company running a coworking space as a beta test for its furniture. After that, he moved to Toronto for a six-month stint helping open a coworking space in a converted bowling alley.

The sharing profession has its setbacks. Baute has had incidents with Airbnb where renters left units damaged and smelling like smoke. He totaled his wife’s car after renting his own out, costing much more than the $550 per month he makes renting out his.

And then there’s the need to be available around the clock.

“You have to be flexible. It does take time,” he said. “Anybody could call you at any point with a car broken or a broken faucet … there’s always that stress.”

But despite any foibles, Baute is dreaming up his next sharing economy business.

He wants to open a co-living space – dorms for adults, comprising studio apartments with shared kitchens and common areas – in the next two years in New England or the Midwest.

“This version of co-living lowers that barrier of wanting to live with people,” he said. “I would go where the developer would want to go … It doesn’t need to be Denver.”

Seven years after sleeping under a desk, Craig Baute now brings in more than $200,000 per year running a coworking chain and renting out apartments on Airbnb.