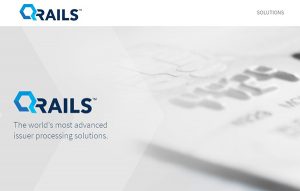 The provider of cloud-based software for banks and other card issuers raised $960,000 and is looking for a total of $3 million, according to a Form D filed through the SEC.

QRails is located at 4600 S. Ulster St. in the Denver Tech Center, and also has an office in London.

It has a 35,000-square-foot data center for servers in Denver and operates other centers in Oregon, Arizona, Minnesota, Iowa, Michigan and New Jersey.

QRails, founded in 2016 as Quantum Rails Services, has raised at least $2.8 million to date, according to SEC filings. Three individual investors contributed to its most recent round.

The company makes a cloud-based website for banks and card issuers to more efficiently process card payments. It also helps companies roll out new card programs, including manufacturing and mailing new credit or debit cards to customers. QRails is currently looking to hire two employees in Denver on LinkedIn.

The company did not return calls or emails seeking comment.

The locally based provider of cloud software for banks and other card issuers is trying to triple that total in its most recent fundraising effort.