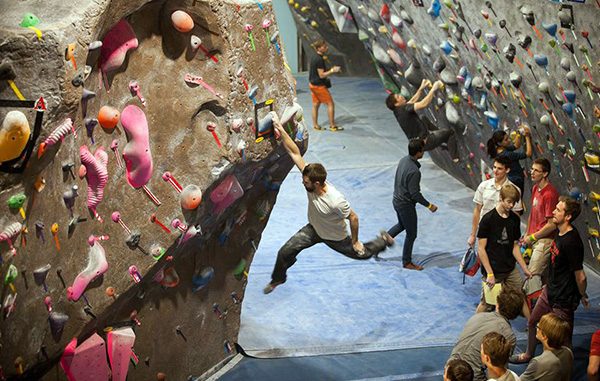 The Spot opened its first bouldering gym in Boulder in 2002. (The Spot)

Dan Howley found the perfect crag for his second bouldering gym in Colorado.

Howley, who opened The Spot Bouldering Gym in Boulder in 2002, is expanding for the first time and signed a lease for 18,600 square feet at 1219-1235 Delaware St. in the Golden Triangle.

“When we first opened up in 2002 climbing wasn’t as mainstream or well-known,” he said. “Certainly the industry has grown a lot.”

The gym, which Howley hopes to open this summer, would feature 12,000 square feet of bouldering walls and 2,500 square feet of fitness space with treadmills, bikes, rowers, free weights and room for group classes.There also will be a lounge, reception area, sauna and retail space.

The Spot plans to hire 20 to 30 new employees for the new gym, which is twice as big as the Boulder location.

Howley, 47, grew up in Long Island and attended the University of Miami. He moved to Colorado in 1994 and worked in outdoor retail at Mountain Sports and Neptune Mountaineering.

When The Spot opened in 2002, Howley said, it was one of two commercial bouldering gyms in the U.S. Bouldering-only gyms have lower operational costs and require shorter buildings, he said.

“In roped climbing, you’ve got a partner, and when the climber gets on the wall, the belayer is on the ground alone,” he said. “In bouldering, it’s really an activity where you can be together as a group, or you can be alone. It’s a lot more versatile.”

In addition to The Spot, Movement Climbing + Fitness is opening another bouldering-only gym in RiNo this summer. The Denver Bouldering Club also has two metro-area locations.

Tyler Bray, a broker at Cushman & Wakefield, represented The Spot in its five-year lease. Howley said rent at the Golden Triangle spot is about $15,500 per month for the first year.

The company hired Caddis Architecture and MPB Contractors for the gym’s buildout.

Howley said the gym’s total startup cost is $1.2 million, which it’s funding with cash flow from the existing gym and a $775,000 loan from First National Bank. Howley said The Spot brought in $1.5 million in revenue in 2017.

“We expect to open numerous other facilities beginning in the next year in the Front Range,” he said.

The Spot opened its first bouldering gym in Boulder in 2002. (The Spot)