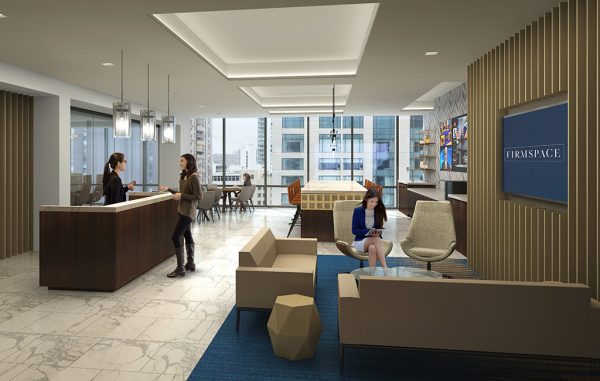 A coworking brand that launched in Austin last year has picked Denver for its second market.

Firmspace has leased 22,000 square feet on the 16th floor of 1401 Lawrence St. The company expects to open in late April.

Chief Development Officer Justin Bayne said in an email that the company sees itself as “a new wave of more upscale coworking spaces and private executive suites for high-class professionals like lawyers and financial services groups.

Bayne said the company wanted to locate in “the nicest, newest Class AA tower in the best location,” and expand to Denver because it’s growing rapidly.

Other companies working out of 1401 Lawrence include anchor tenant Polsinelli law firm, brokerage Cushman & Wakefield and CoBiz Financial. The 22-story tower was purchased by Chicago-based Heitman in December.

Firmspace also has locations in the works for Atlanta, Dallas, Houston, Miami, New York City, Salt Lake City and Washington, D.C., according to its website. Bayne said the company hopes to ultimately have multiple Denver-area locations.

A year-old company that bills itself as upscale offices for high-class professionals expects to open in April on Lawrence Street.