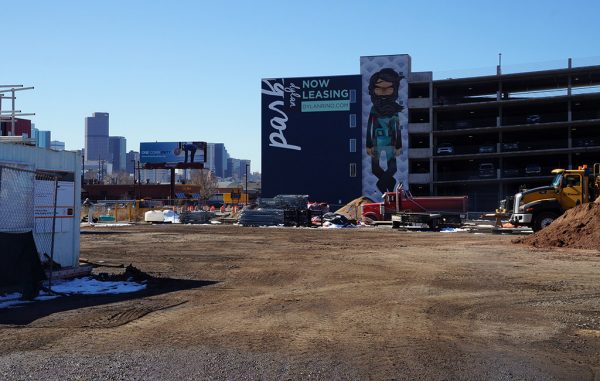 Tom and Brooke Gordon didn’t intend to be land speculators, though they more than tripled their investment in RiNo over the last 3.5 years.

The pair paid $11.54 million for the parcels in September 2014, according to property records. The purchase was financed with a $7.8 million loan from the site’s previous owner, River North Properties LLC, according to a deed of trust.

The new land owner is San Francisco-based Carmel Partners, which develops multifamily properties. It has an office at 7070 17th St. in Denver.

In 2016 the Gordons said they planned to build more than 200 residential units, a hotel and office and retail space on the Brighton Boulevard parcel. The Arkins Court parcel was supposed to become home to million-dollar row homes.

The plans never came to be. While construction equipment is currently on site, a worker said Monday the land is being leased by Kiewit, which is using it as a staging area while it renovates the Brighton Boulevard corridor.

Tom Gordon said the development failed to materialize because of a dragged-out eminent domain battle with the city.

Gordon said he and his wife purchased the land believing the city intended to take particular portions of the site, and created a site plan that revolved around that likelihood. The couple demolished the old concrete structure that once housed Drive Train Industries — the development’s namesake.

In August 2016, Gordon said, the city said it would abandon its condemnation efforts.

“For them to say, ‘No harm, no foul’ after we spent $1.5 million on site development plans we’d need to redo, it’s ridiculous,” Gordon said. “So we fought and we won.”

After a court ruled the city had to take the land, there was another court battle over compensation, Gordon said. He said he ended up getting $5.2 million, and $900,000 of that went to legal costs.

The litigation “put us at a standstill” through early 2017, Gordon said. By then, the couple was hearing from potential buyers.

“By the time it was all resolved, we frankly were burned out,” he said.

A Carmel Partners executive did not respond to a request for comment. The company has submitted materials to the city proposing a 500-unit apartment development with ground-floor retail space.

Carmel’s website says the company has built or renovated 16 multifamily properties in the Denver area, including The Henry at 201 E. Mississippi Ave. and Westend at 3500 Rockmont Drive. The firm’s ground-up development on the Front Range was Water Tower Flats, a 324-unit development in Arvada.

Tom and Brooke Gordon didn’t intend to be land speculators, though they more than tripled their investment in RiNo over the last 3.5 years.