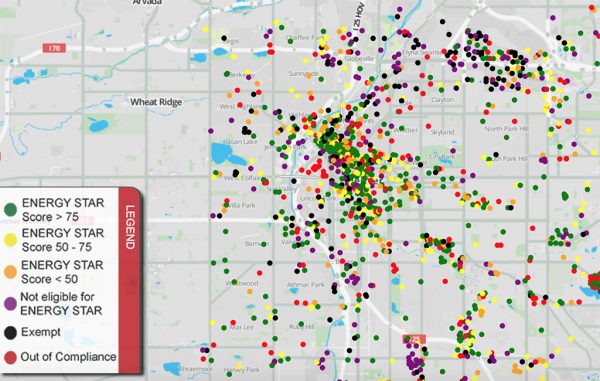 The City of Denver has released an online tool that shows how large buildings across the city rank when it comes to energy efficiency.

The Building Energy Performance Map displays Energy Star scores, which are on a 1-100 scale. A score of 50 is consistent with the national average for a building type.

The map draws from data collected following the City Council’s December 2016 approval of an ordinance requiring commercial and multifamily buildings in excess of 25,000 square feet to report annual energy performance.

The map displays scores for buildings greater than 50,000 square feet. Owners of those structures had to report their data by September 2017. The city said it had a 90 percent compliance rate.

There is no punishment for buildings with low scores. Owners that don’t submit data will be fined $2,000 per year.

The city said energy use from heating and cooling buildings is the largest source of greenhouse gases in Denver, accounting for 57 percent of its carbon emissions.

“Benchmarking the energy performance of a building is the first step toward understanding and reducing its energy consumption, which is directly tied to harmful emissions,” Katrina Managan, senior adviser with the Denver health department, said in a statement.